The Zweihänder is William's main weapon on Lyoko and the Cortex in Code Lyoko Evolution.

William generally fights by using the Zweihänder's unusual size to his advantage, as it is capable of slicing two monsters all at once with one swing, unlike Ulrich's sabers.

In the episode Final Round, William primarily uses the Zweihänder to deliver slow but powerful blows, defeating several Creepers with a single hit. For defense, William is able to deflect lasers at monsters by using the sword.

Since being possessed by X.A.N.A., the Zweihänder gains the ability to charge up and then release energy in the form of silver waves, which are also rather slow to execute, but deals a great amount of damage upon hit, often results in an instant death.

After being released from X.A.N.A.'s control one year ago, the Zweihänder receives several upgrades from X.A.N.A. (which also includes the ability of Super Smoke). With William's increased physical strength, the sword is easier to handle, increasing his dexterity with the weapon. The Zweihänder is also heavily integrated with William's Super Smoke ability, and he is able to use the ability to make the sword vanish when not using it, or summon it directly to him if he is separated from it.

The Zweihänder is a massive sword, longer than William is tall. It has a wide, single-edged blade and a long, thin handle. The blade is silver in color and glows white when being used in combat, including while charging a wave attack. Apart from these general features, the Zweihänder goes through several appearance changes throughout the series.

In Final Round, the only episode during which William has his original avatar, the Zweihänder has a red handle and a simple triangular design on its hilt.

While William is under X.A.N.A.'s control, the Zweihänder's handle changes from red to black, and black, root-like structures decorate the blade. There is also an Eye of X.A.N.A. near the sword's hilt. While on Earth as a spectre, the Zweihänder blade is a darker shape of grey and the roots on the blade are red instead of black, as shown in Cold Sweat.

In Code Lyoko Evolution, the Zweihänder's appearance changes again. The handle is black with orange stripes, and there is an orange, circuit-like design on the blade. The sword is also noticeably smaller than it is in the original series.

On earth, held by X.A.N.A. William as a spectre.

Stuck in the ground.

Battling Ulrich in the Desert Sector.

Defending against an Energy Field.

William examines his weapon closely in Final Round.

Swinging it to release an Energy Slash.

Holding it when using Levitation.

Holding the weapon, ready to fight in "Double Take".

Using it as a Spectre on earth.

Using it to slice through Creepers.

The sword's appearance in Final Round.

The sword when William is possessed by X.A.N.A.

Holding it up to deflect an attack.

About to fire energy at Aelita after absorbing her Energy Field.

Odd, Ulrich, and Yumi see William's Zweihander as he tosses it at the ground.

The Zweihänder getting tossed by William in Final Round.

The Eye glows as it lands into the ground, with smoke surrounding it.

Odd dodging the Zweihänder with ease in Replika.

William holding his Zweihander in real world in "Cold Sweat".

Using it to deflect a Laser Arrow.

Deflecting rapid-fire Arrow with the sword.

Striking Yumi in the air in Crash Course.

The Zweihander is seen in the right corner as Yumi is being devirtualized.

The Force of the hit sends Odd flying back.

Holding it over his shoulder. 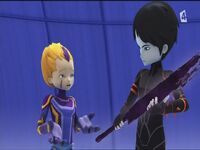 Putting it away in Evolution.

The weapon has changed size in Evolution.

About to slice through a monster. 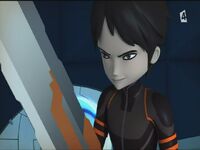 Holding it close for combat. 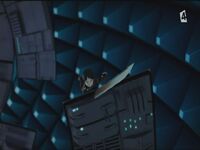 Holding onto it while in the Cortex.

Attacking a Blok, ready to slice the it.

William Clone with his Zweihander about to attack Yumi in The Codeless.