Yolanda Perraudin, originally known as Dorothy Perraudin, is the nurse at Kadic Academy.

She is tall, short-haired blonde, who wears a short blue skirt, a crimson pink shirt, brown heels, blue earings, and a lab coat.

Yolanda is the only known worker at the Infirmary, and probably runs it.

In Image Problem, she was attacked off-screen by X.A.N.A. Yumi when she tried to help her after her friends found her unconscious in the scanner.

In Amnesia, she treated Ulrich when he lost his memory and later Sandra Dialo and Jim when they got affected by amnesia as well.

In Killer Music, she ordered the principal to call the ambulance to pick up a comatose Odd. Later, she turned on the radio with some classical music and when Yumi brought a comatose Sissi to the Infirmary, she was put into coma by X.A.N.A.'s killer music as well after the programm hacked her radio.

In Code: Earth, she treated injured Jeremie after he fell from the stairs and told him that he cannot walk for at least one week.

In The Chips Are Down, she treated an unconscious Nicholas after he was brought to the Infirmary by the Lyoko Warriors after his possession ended.

In Temptation, she treated Jeremie after he was found unconscious in his room and decided to call an ambulance so it would take him to the hospital for a better treatment.

In Attack of the Zombies, she was turned into a zombie and roamed the park.

In X.A.N.A.'s Kiss, a Polymorphic specter took an appearance of Yolanda to kiss Jim. Later in the episode, when Jim confessed his feelings to her she was flattered but told him that she's already engaged, and when Jim told her that she kissed him, she believed that he was ill and decided to check his temperature.

In Tip-Top Shape, she had organized the medical checkup for every student at Kadic and later was possessed by X.A.N.A. to bring Aelita to Lyoko. She also fought in the Factory with Odd after he was amplified by Jeremie and the tower he activated. She was later brought back to the infirmary after her possession ended.

In Tidal Wave, she tutored the students about healthy lifestyle and balanced diet during the Nutrition Day.

In Aelita, she told Odd that he's suffering from severe plantar perspiration and gave him a cream that could kill the smell. However, the cream turned out to smell even worse than his feet.

In Replika, she helped Jim to get to the Infirmary after he had an accident during PE class and rebuked him for straining his body. This was her last appearance in the series.

In the infirmary room. 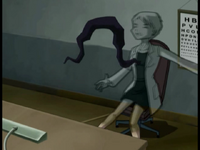 Being possessed in Tip-Top Shape. 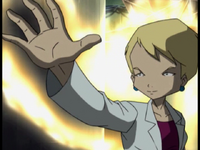 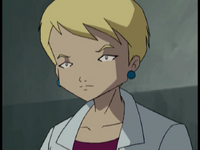 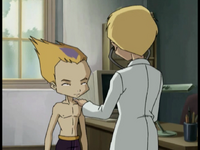 Odd has a check up with the nurse. Seen in Tip-Top Shape. 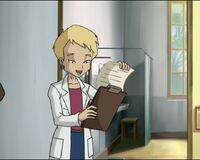 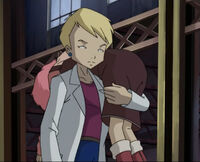 Possessed Yolanda with a kidnapped Aelita 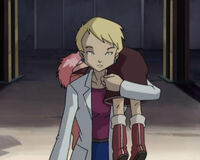 And thinks he's ill and checks his temperature

Yolanda is surprised when Jim says she kissed him 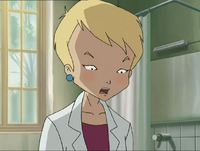 A polymorphic spectre with Yolanda's appeareance kissing Jim on the cheek 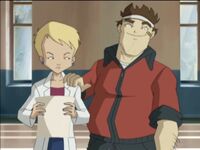 Surprised when Jim puts his hand on her shoulder...