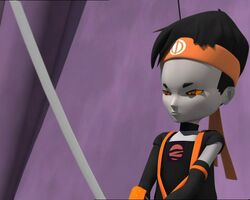 X.A.N.A. Ulrich (sometimes referred to as Ulrich Clone) was a Polymorphic Clone of Ulrich Stern created by X.A.N.A.

X.A.N.A. Ulrich first appeared in X.A.N.A.'s Kiss, when X.A.N.A.'s polymorphic clone took appearance of Ulrich and kissing Sissi in front of Yumi and Jeremie in order to cause conflict between the group. Later, the clone was spotted by Jim outside class, and it gets chased by the latter, but the clone manages to get away by transforming into the school nurse, Yolanda and kissing Jim in the cheek. The clone can be briefly seen in the appearance of Ulrich when fighting Odd in the Hermitage, before transforming into Odd.

The clone also made an appearance in Revelation. After Ulrich says to the Odd clone that Odd never defeated him, the clone transforms from Odd to Ulrich. The clone looked different from Ulrich, it's skin was grey and the yellow parts of Ulrich's outfit were orange. The real Ulrich and X.A.N.A. Ulrich then engage in battle. X.A.N.A. Ulrich is equal with the real Ulrich in term of speed and ability, even being able to disarm Ulrich and steal his katana. Despite that his weapon was stolen by X.A.N.A. Ulrich, Ulrich is still able to defeat his evil counterpart.

In Nobody in Particular, Jeremie tried to virtualize Ulrich directly into Sector Five, which ended up turning into a failure because during the Virtualization process, Ulrich's mind and body got separated. Jeremie managed to localize Ulrich's body in Sector 5, but when he does, he discovers that it seems to be moving on its own (which obviously shouldn't be the case because without Ulrich's mind, it can't move at all). Aelita and Yumi are virtualized onto Lyoko to investigate, only to discover that Ulrich's body has been possessed by X.A.N.A. The two girls chase it down into the Great Hall of the Core of Lyoko. When they get there, Aelita and Yumi fight Ulrich's body and several Mantas. After the girls both get devirtualized, Odd (who couldn't investigate with Yumi and Aelita sooner because he was required to attend an academic review that was being held that morning) comes in and destroys the last remaining Manta. Odd and Ulrich's body then engage in a short battle. Odd won in the end, allowing Jeremie to able to fuse Ulrich's (who was waiting in a scanner before his body was devirtualized) incorporeal form and body back together.

X.A.N.A. also created the clone in Evolution to steal the Lyoko Warriors's Source Codes. It appears in Spectromania, in which X.A.N.A. Ulrich tries to steal Ulrich's codes. The clone was disintegrated after Odd deactivated the tower supporting it, thus saving Ulrich.

X.A.N.A. Ulrich also made a short appearance in Confusion. It appeared in the boys bathroom in order to steals the codes of Ulrich, who is brushing his teeth, before it disappears itself.

X.A.N.A. Ulrich appears in both Earth and Lyoko in False Pretenses. After Jeremie virtualizes the real Ulrich to Lyoko, X.A.N.A. takes the opportunity by sending the Ulrich clone to join William and Yumi. Not receiving any suspicions from them, the clone easily devirtualizes Yumi. The clone was devirtualized by William. Later, Yumi and Aelita meet with the polymorphic clone of Ulrich in the park. Not sure whether everyone are X.A.N.A.'s polymorphic clone or not, they decide to ask questions. When it's the clone's turn, it made a mistake by throwing a question that the real Ulrich would never ask; "What is the name of the person you love?". After the clone is unmasked, it tries to steal Yumi and Aelita's codes, but once again, it is stopped after Odd deactivated the tower.

Like Ulrich, X.A.N.A. Ulrich is voiced by Barbara Weber-Scaff in the English dub and Marie-Line Landerwyn in the French dub. In Evolution, he is portrayed by Quentin Merabet.

Like most polymorphic clones sent by X.A.N.A., this clone was programed to manipulate the romantic bonds of Ulrich and Yumi in the human world. However, in the digital world, the spectre was no match with its opponent when assuming Odd's form so it took on Ulrich's instead after understanding what the warrior meant by his friend always being outmatched by him when they battled.

Fighting the real Ulrich in Revelation.

Both of them are equal in speed.

Ready to attack to Ulrich with both katanas.

Ulrich's body after being possessed by X.A.N.A. in Nobody in Particular.

The clone disembodied in Confusion.

The clone in Code Lyoko: Get Ready to Virtualize.