After defeating X.A.N.A. and shutting down the supercomputer the previous year, the Lyoko Warriors have been enjoying normal lives. However, they notice that something extremely familiar is happening again. After the school's speakers explode, they decide to restart the Supercomputer to check whether there was something strange on Lyoko (this is being done without William).

Jeremie informs the team that the Forest and Ice Sectors have disappeared due to the long period of time in which the Supercomputer was shut down. Aelita and Odd go to Sector Five to see whether or not X.A.N.A. was behind the incidents at Kadic. Yumi and Ulrich then leave the factory.

After Jeremie virtualizes Aelita and Odd, a tower is suddenly activated. Three Megatanks appear in front of them. They managed to destroy two of them, but Odd is devirtualized afterwards.

On Earth, in the gymnasium, a polymorphic clone disguised as Jim attacks Yumi and Ulrich. "Jim" grabs onto Ulrich, and Ulrich suddenly becomes blind. The two rush to the sewers and Yumi leaves Ulrich in the sewer tunnel and hurries to help Aelita on Lyoko. They defeat the last Megatank. However, two Krabs arrive. Odd goes to save Ulrich. However, the spectre catches up and attempts to attack Ulrich. Odd blocks the spectre, and is mysteriously injured as well. After a short battle, Aelita manages to deactivate the tower.

Sometime later, Jeremie discovers that X.A.N.A. implemented his codes inside of Aelita, Odd, Ulrich and Yumi, which allowed him to survive his defeat, and is now working to reclaim his codes. Jeremie also reveals that X.A.N.A. was not in anywhere inside Lyoko, but somewhere in the network itself.

Ulrich preparing to talk to Yumi.

Jim sees a Spectre of himself.

Odd being weakened by the Jim spectre

Odd and Aelita virtualized to Arena. 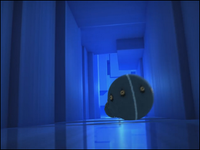 Yumi getting ready to attack a Krab. 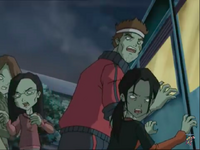