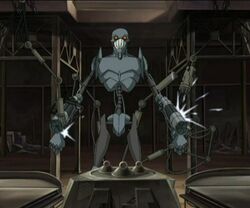 X.A.N.A.'s first robots were the robots he developed as an attack in The Robots. The robots were assembled in the Assembly Room inside the Factory.

The Robots were humanoid in build, bipedal, had standard arms, a head, etc. They were equipped with screw guns on their arms, similar to the one in the Iron Sissi, but not covert. They had a humanoid face, with red eyes, and a oversized jaw, comparable to the "reverse beartrap" in one of the saw movies. The eyes turned black when the robots shut down. 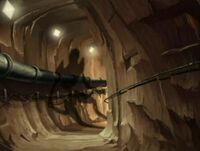 Seeing its shadow as it creeps out from the sewer. 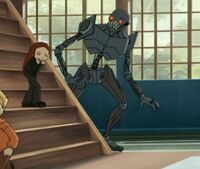 Looking for the Lyoko Warriors. 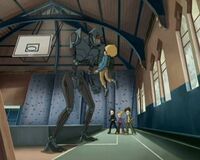 It graps Jeremie in the gym.

The back of the robot shown up close.

It searches for Yumi and Ulrich outside.

It delivers a hard hit to poor Ulrich. 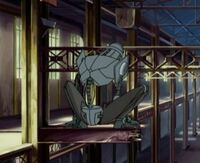 Waiting to attack in the Factory.

A robot prepare to shoot Ulrich.
Add a photo to this gallery
Retrieved from "https://codelyoko.fandom.com/wiki/X.A.N.A.%27s_first_robots?oldid=141920"
Community content is available under CC-BY-SA unless otherwise noted.