X.A.N.A.'s ultimate plan at the end was to create a series of robots. It planned to manufacture these robots without end, so it could have an army it can use to conquer humanity.

Assembly of the robots began sometime after The Key, and prior to Cold Sweat. They were clearly assembled at Union Base in Siberia, but it's possible that they have imported components.

They first appeared in Down to Earth, in which they attacked Odd and Aelita. Several of them were destroyed by them during that encounter, but the majority were still working. That was their only appearance. It is assumed that X.A.N.A. was building this army in secret, and because the rest of the army was never activated since X.A.N.A.'s destruction, it is hopeful that they had been forgotten by the world.

No variation between units is known to exist between the robots. Each robot was humanoid, and at least 6 feet tall. They were equipped with laser cannons in their left arms, with a standard hand on their right. They had 6 eyes "in two sets of 3" per head. Each head had 2 antenna. They had a panel with the Eye of X.A.N.A. on the left of their chest panels, which like all X.A.N.A.'s monsters, is their weak point. 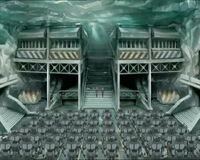 There are a huge number of them. 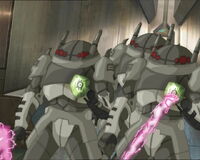 The robots fires their electric cannon.
Add a photo to this gallery
Retrieved from "https://codelyoko.fandom.com/wiki/X.A.N.A.%27s_Robot_Army?oldid=141936"
Community content is available under CC-BY-SA unless otherwise noted.