Music to Soothe the Savage Beast

The episode opens with Aelita and Jeremie searching the Hermitage, hoping to find something useful related to Franz Hopper's work. In the living room, Aelita finds an old photograph of herself and her father, and Jeremie recognizes a computer code written on a chalkboard in the background which might prove to be useful to them.

After returning to campus, Jeremie scans the photo onto his desktop in his dorm and begins copying the code while the other Lyoko Warriors eat lunch in the cafeteria. After eating, Odd goes to Jeremie's dorm and asks to use his desktop to send an email, hoping to seduce Anais Fiquet with a flattering picture of himself. Jeremie agrees and goes to the cafeteria for lunch, leaving Odd alone. However, instead of sending a picture of himself to Anais, Odd accidentally sends the picture of Aelita and Franz Hopper to Sissi.

After Sissi receives the photo, she thinks that she saw Aelita's father somewhere in the past so she prints out a copy and shows it to her father, who recognizes Franz Hopper as a former science teacher at Kadic Academy before being replaced by Suzanne Hertz. While the Lyoko Warriors walk through the courtyard, Jeremie reveals to the others that the program from the photograph would allow him to reboot the supercomputer, something he does not appear to be very useful to him but might come in handy on some ocassions. Suddenly, Jim approaches them and orders them all into Mr. Delmas' office, where Aelita is interrogated about her connection to Franz Hopper. Despite Jeremie providing a convincing alibi due to Aelita's current age, Mr. Delmas remains suspicious and confines the five students to the campus library for the rest of the day under Jim's supervision while he performs a background check on Aelita's identity. Meanwhile, X.A.N.A. activates a tower in the Forest Sector.

As Mr. Delmas investigates Aelita's identity, a spectre emerges from a wall outlet in his office and possesses him. In the library, the Lyoko Warriors are watched over by Jim, and Jeremie is alerted by the Superscan to the activated tower on his laptop. When Delmas arrives to retrieve Aelita in order to ask her some more questions, Jeremie notices the Eye of X.A.N.A. in his eyes, and tries in vain to run after him, but is stopped by Jim. Aelita is taken into the park and electrocuted unconscious by the possessed principal as she begins to demand to be taken to his office. He then drapes the knocked out Aelita over his shoulder and takes her into the sewers towards the factory. Meanwhile, Jeremie, Ulrich, Odd, and Yumi manage to easily overpower Jim and tie him up before heading over to the Factory to rescue Aelita.

However, Delmas is able to reach the Factory first and sends the still-unconscious Aelita to Lyoko before intercepting the others at the elevator, barring their path. Odd then volunteers to hold off the principal while Yumi, Jeremie, and Ulrich use an emergency ladder to get to the Lab. As Jeremie prepares to send Ulrich and Yumi to Lyoko, Aelita awakens and is confronted by the Scyphozoa, forcing her to retreat. Yumi and Ulrich arrive on Lyoko and give chase as well, but are stopped when two Krabs appear. As Odd continues to fight Delmas on the main floor of the Factory, Aelita tries to hit Scyphozoa with her Energy Fields but the monster dodges them and manages to capture Aelita, which proceeds to possess her.

When Ulrich and Yumi defeat the Krabs and catch up to the Scyphozoa, they discover they are too late, and the possessed Aelita attempts to throw herself into the Digital Sea willingly. As Yumi battles two Tarantulas that have arrived at their location, Ulrich moves in to devirtualize Aelita only to have one of his katanas stolen by her, prompting the two friends to engage in a sword fight. As Odd begins to lose his fight against Delmas, Jeremie begs Ulrich not to devirtualize Aelita, as that would make it impossible to deactivate the tower and save Odd. Aelita becomes more and more brutal towards Ulrich in their fight and Odd sprains his ankle while battling the possessed principal as the latter tries to crush Odd with a metal grider. Jeremie is unable to do anything but then he suddenly remembers the rebooting program from the photograph, which he has burned to a CD, and informs Ulrich and Yumi that he is going to reboot the Supercomputer in an attempt to break Aelita's possession.

Jeremie initiates the program, causing a massive blue aura to temporarily envelop Lyoko, rebooting and resetting all its functions and lifting Aelita's possession but also making her fall unconscious. As Ulrich escorts a severely fatigued Aelita to the activated tower on the Overbike, Yumi is devirtualized by the last Tarantula, which begins chasing Ulrich and Aelita. While Ulrich intercepts the monster's lasers, Aelita manages to enter the tower and deactivate it, saving Odd from Mr. Delmas, who loses consciousness on the Factory floor. Jeremie then activates a return to the past to erase Jim, Sissi, and Mr. Delmas' memories and heal Odd's injuries.

After the return in time, the Lyoko Warriors convene in the courtyard before class, where Aelita reveals to the others that her real last name is Schaeffer. Her father, Waldo Schaeffer, assumed a new life and a new name when he moved his family to the Hermitage. Franz is Waldo's middle name, and Hopper is Aelita's mother's maiden name. As the others leave to go to class, Aelita hangs back and pulls the photograph of her and her father out of her bag. After staring at it fondly, Aelita smiles to herself before walking to class.

X.A.N.A. Aelita is about to devirtualize Ulrich with his own katana

X.A.N.A. Delmas carrying an unconcious Aelita to the factory 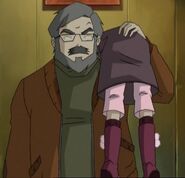 Unconcious Aelita in a scanner

The photo of Aelita and her father Franz Hopper