Triplicate is Ulrich's unique ability on Lyoko. He has the power to replicate up to two clones of himself. Each clone only has one life point. Ulrich and his clones can run around an enemy in a triangle formation with one Ulrich at each corner and can triple team the enemy. Ulrich calls this move Triangulate.

While the clones are very easy for enemies to pick off, they can kill monsters. Their swords can also be used by Ulrich and even other avatars. Also, while Ulrich's clones are just as capable as he is in combat, they seem to vary in intelligence. Sometimes not even able to speak, they are merely puppets to Ulrich and do whatever he tells them to do. Other times, they are very intelligent, being able to speak, think, and even act like Ulrich, taunting X.A.N.A.'s monsters and or kicking them into the air for fun. For example, a Kankrelat in Tip-Top Shape.

In Sabotage, the supercomputer was suffering from numerous bugs that affected both the Lyoko Warriors and the monsters. Ulrich tried using Triplicate against a single Tarantula, but because of the bugs, neither of his clones appeared. In Nobody in Particular, it was shown that X.A.N.A. Ulrich can use Triplicate as well as he did to devirtualize Odd who was trying to stop him from destroying the Core of Lyoko.

In the fourth season, he used this cloning ability only once; against X.A.N.A. William in Double Take. Unfortunately, William quickly figured out the real Ulrich used Super Smoke to devirtualize him before he and his two clones could even attack.

The process is reversed by the ability of "Fusion." 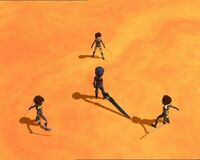 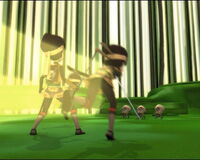 Ulrich orders his clones to attack! 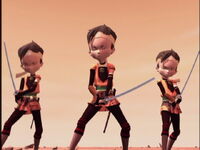 First seen in Seeing is Believing. 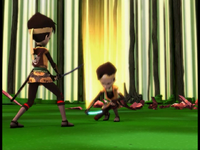 Destroying a Krab in the Forest Sector. 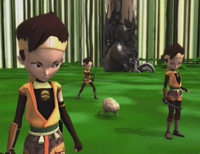 Ulrich and his clones have a little fun with X.A.N.A.'s monsters.