The Girl of the Dreams

Triangulate is an ability Ulrich possesses on Lyoko. It is a combination of his Super-sprint and Triplicate abilities. When he activates it, Ulrich and his two clones form a triangle. His silhouette runs between them, disorienting the enemy and making them dizzy. He then usually strikes them unexpectedly in the back. Ulrich has been known to run in a circle around monsters as well as a triangle, but this is normally used on Tarantulas.

After a monster is destroyed by Triangulate, Ulrich can either fuse his two clones back with him, or further use them to help aid in destroying more monsters. The process is reversed by using Fusion.

Using it to surround a Blok in the Ice Sector.

Using the move on a Hornet in "Swarming Attack".

Using the move again in the Forest Sector in "The Girl of the Dreams". 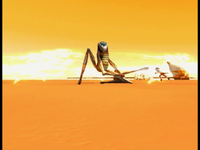 Circling a Tarantula in Season 2. 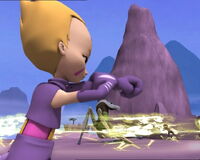