Towers are variously tall, cylinder-shaped (rectangle-shaped in Code Lyoko Evolution) structures located on the virtual world of Lyoko. They can be "activated" by various parties and used to harness the true strength and power of the Supercomputer. There are 21 Towers in total located in each Sector; excluding Sector Five, which used to have only 1, 2 as of X.A.N.A. 2.0, and now 3 as of Friday the 13th; the Cortex, which has at least 1; and the Volcano Replika, whose number isn't documented.

Every time X.A.N.A. attacks, it activates a Tower and uses its connection to the real world to launch an attack. These attacks range from taking over networks to creating spectres. However, the usual purpose is to stop the Lyoko Warriors from accessing Lyoko and the Factory.

The core purpose of the Towers is to tap into the true power(s) of the Supercomputer. Simple programs like monsters and the Superscan don't require actual quantum computing power and are run without an activated Tower. But programs such as the polymorphic spectre and, for example, a program for reinforcing the Skidbladnir's shielding, require an extreme amount of computing power. A Tower is activated so that extra power can be harnessed to run these programs.

Towers are opaque tall cylindrical objects. Normally, monsters cannot enter them, though people can. According to Aelita, this requires conscious thought that you can enter the Tower. "Going to the second level requires the same system." The interior is circular, with two decks. Upon entering, a person is on the lower deck.

If one jumps below the lower deck, they will be sucked into a data stream, and end up at either the same Tower or different Tower as Odd experienced this in Crash Course when he was stuck in the Ice Sector. If the Tower is a Way Tower, they will go to a way Tower in a different Sector. For some reason, active Towers seem to be blocked from this means of entry.

The lower deck has the Eye of X.A.N.A. as its design. The different sections of design light up or turn off depending on a person walking on them. When a person reaches the center, they can float up to the upper deck "usually with a backflip so they don't hit their head on the deck." The upper one lights up as one circuit. There is an interface there.

The interface has direct control over whatever program is running within the Tower. In the case of Way Towers, this is the code for the Sectors themselves. If the Tower is active, it's the program for whatever the Tower was activated for. These interfaces can also be used for accessing the internet, as Aelita did in Season 1 to research the real world.

There have been several occasions in which Jeremie or Aelita activated a Tower for their own programs. But part of the program/operation appears to be a firewall or encryption algorithm to prevent anybody from interfering. When X.A.N.A. activates a Tower, the only one with the power to deactivate it is Aelita, using one of the Codes. When Jeremie activates a program, he often mostly hopes that X.A.N.A. simply doesn't try to hack the Tower and infect/corrupt the program. That proves that X.A.N.A. is the superior programmer between itself and Jeremie.

They were created by Franz Hopper for a less sinister purpose. As a computer scientist, he needed a stable way to tap into the computer's resources. Also, they serve as transportation throughout Lyoko. Towers are located in all the Sectors of Lyoko. They are surrounded by various glows or auras depending on who's currently using them.

On the inside, there are two platforms, both engraved with the Eye of X.A.N.A.. They glow if someone steps on them. No matter what direction a being enters from, they always enter onto the same branch of the eye (although this could be just the characters knowing which side to enter through, because in X.A.N.A. Awakens Part 1, Odd, not knowing how to get into a Tower, accidentally falls in through the side and misses the platform, with Ulrich following close behind). The lower eye is more of a deployment platform if one wants to surf between Towers, though it does have an interface. The upper platform has the more commonly used interface panel, which Aelita operates by typing in a Code.

Also, the Towers, as seen in Code: Earth and Contact, are not immovable or indestructible. They can shake, and eventually be destroyed with several blasts from a Megatank's Laser.

Just like all roads lead to Rome (which you may not have known), all Towers lead to Sector Five via greyish wires that connect them all. If these wires are destroyed, the Tower is isolated from the rest of the system. They can be forcibly shut down by damaging them; this has only been done by X.A.N.A. two times, once in Code: Earth and again in Contact. Towers were, in Seasons 1 and 2, also the only place where Aelita could materialize from. Towers have the ability to replenish the life points of the Lyoko Warriors whenever they are inside the tower.

In A Great Day, it is revealed that return trips to the past can't deactivate Towers.

In Season 4, It is shown that William has the ability to place Towers under X.A.N.A.'s control by entering the code X.A.N.A. into the Tower interface; he did this on the Forest Replika in Lab Rat to break the team's connection to the real world.

In Evolution, Towers take on a new appearance: completely black and square-shaped. When activated, rectangular panels detach from the top part of the Tower and float around it, revealing the color of the aura (Red most of the time, during X.A.N.A. attacks) beneath. Way Towers are the only ones that can be entered when not activated, and one must be calm before entering any Tower. The insides of the Towers remain cylindrical like in previous Seasons. Odd, Ulrich and Yumi can also deactivate Towers in Evolution since X.A.N.A. injected them with its source codes. When one of them loses all their source codes, they are once again unable to enter the Towers.

Like most sophisticated systems, there is a system with defined rules about who can do what; with the Towers.

Special Rules for the Annex Program

If the Tower is inactive:

Anyone with working access to the applicable supercomputer, and the knowledge of how to do so, can activate one of these Towers.

If the Tower is under Jeremie's control:

If the Tower is under X.A.N.A.'s control:

If the Tower is under Franz Hopper's control:

X.A.N.A. can deactivate these by critically damaging them via Megatanks. Because Franz Hopper knows how to secure his Towers from outside influence, X.A.N.A. is incapable of seizing control of his own Towers.

If the Tower is under Tyron's control:

These rules aren't defined. Tyron has only activated a Tower on the Cortex. The Cortex is actually a reverse-engineering of Lyoko, but not completely compatible with things designed for Lyoko. As a result, there may be special but undocumented rules.

If the Tower is a Way Tower

Anyone with the annex program can deactivate these. Code X.A.N.A. is always the program to deactivate them. The Sector the Tower occupies is then deleted. In Code Lyoko: Quest for Infinity, Replikas have the same effect, except on Replikas, Code Chimera is used instead. Please note, however, that the Chimera code is for the game only.

The number of Towers has fluctuated throughout the show.

According to an interview with head writer Sophie Decroisette, there are a total of 85 Towers on Lyoko, 21 in each of the surface sectors, and 1 in Sector Five.[1]

After the Forest Sector was deleted in Season 3 in "Lyoko Minus One," the Tower count dropped to 64. It would be further reduced to 43 after the Desert Sector's deletion in "The Pretender." Following the Ice Sector's deletion, the Tower count was reduced to 22. With the deletion of the Mountain Sector in "Double Trouble," this only left 1 Tower. Following the destruction of the Heart of Lyoko in "Final Round," there were no Towers left.

Since the Replikas are copies of a single sector of Lyoko, it can be assumed that the Desert, Ice, and Forest Replikas only had 21 towers, while the Carthage Replika only had 1. The same rule would apply for the Mountain Replika.

The Cortex has an unknown number of Towers.

These numbers are turbulent depending upon how one counts the Volcano Replika, which is part of the video game continuity rather than the series itself.

According to the DVDs, each of the Towers are numbered and in a specific location. Since there seems to be no specific pattern to their order, the numbers of the other Towers cannot be extrapolated from the numbers given. These are the locations of the Towers given on the third DVD, X.A.N.A. Possessed.

>> More images of the Towers in Evolution 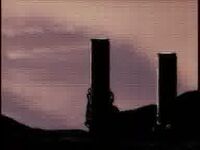 Two towers seen at the end of Garage Kids. 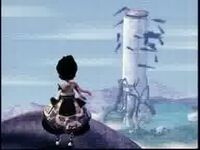 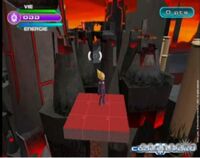 Towers in the Volcano Replika in Quest for Infinity.

A tower controlled by X.A.N.A. in Code Lyoko: Social Game.

A deactivated tower in the Social Game. 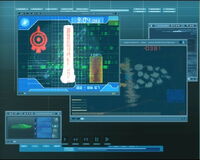 A tower is activated in the series. 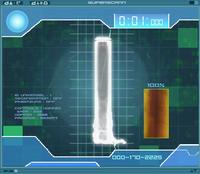 White tower in the IFSCL. (OLD) 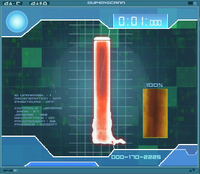 Red tower in the IFSCL. (OLD) 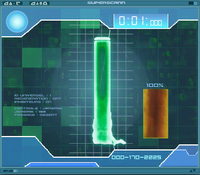 Green tower in the IFSCL. (OLD) 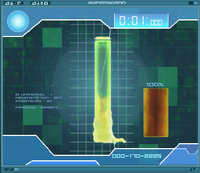 Normal tower in the IFSCL. (OLD) 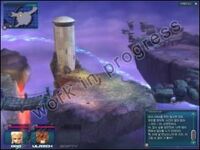 A tower in the aborted Code Lyoko MMORPG
Add a photo to this gallery
Retrieved from "https://codelyoko.fandom.com/wiki/Tower?oldid=146512"
Community content is available under CC-BY-SA unless otherwise noted.