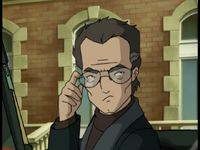 Thomas Vincent (also known as T.V.) is the famous news reporter on the TV News Channel. On camera, he seems to be very kind and has a deep warm voice, but off-camera, he's rude and stuck-up. He likes to film events that are "PG-13". His partner and cameraperson is Edna, who he has little respect for since he "has 150 cameramen who would kill to work with him".

He first appeared in Cold War, where he was doing a report on failures in the educational system. This had a number of failures, because some of the students he was interviewing had extremely high GPAs, such as Jeremie. He cut out several interview questions from students, because they didn't fit the report he wanted to make. He was rude to most of the staff, such as Jim, Rosa, and Mrs. Hertz. He fired Edna for refusing to go out in the blizzard that X.A.N.A. formed Following the return to the past, he got his comeuppance after Rosa dumps meatballs on his head.

He made a cameo in Temporary Insanity, when two police officers skid out of the way to avoid hitting Ulrich, only to block traffic on a different street. Thomas and Edna got out of their car to interview them about the matter. 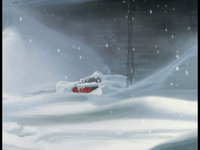 Vincent's car is covered in the deep snow in Cold War. 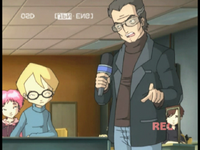 He wanders through the class, wanting to find someone to interview. 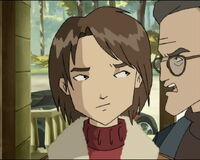 Add a photo to this gallery
Retrieved from "https://codelyoko.fandom.com/wiki/Thomas_Vincent?oldid=142693"
Community content is available under CC-BY-SA unless otherwise noted.