The Heart of Lyoko

The Heart of Lyoko (mainly called the Core of Lyoko) is located in the middle of Sector Five. It is a large blue sphere containing an image similar to that of the holomap: a small, gold sphere with the Eye of X.A.N.A. on it in the center, surrounded by the four surface sectors. It is protected by two powerful cube shields, although with some extensive effort, these shields can be destroyed, leaving the orb completely unprotected.

These shields are orb-shaped in Code Lyoko Evolution, and the surface sectors are no longer visible.

It houses all of the programs on Lyoko, and if it were to be destroyed, all of Lyoko would disappear. The team can reach the Core Zone by using the Elevator to get to the Celestial Dome. The team must then ride their vehicles to the southern side of the Dome into an opening-and-closing entrance. The key lever must then be pushed to gain access for the stairs to the Core Zone.

The Core has two protective layers that can only take a certain amount of damage before it blow into pieces. Each shield layer destroyed causes the entire room to be covered in red streaks. Once all the layers are destroyed, the sphere can be destroyed with one simple hit, and Lyoko along with it in all spiral of golden light.

The sphere seems to also contain a holomap of Lyoko with all the sectors. If a sector were to be destroyed like in Lyoko, it would disappear from it as well.

The Heart of Lyoko was first found in the premiere episode of Season 3, Straight to Heart. The team were confused when no monsters were shown on the Factory Interface, except in a large room beneath the Arena where they were all gathered. Jeremie ordered them to get there fast as possible. Once there, the group found the monsters shooting at "some sort of blue ball." Jeremie informed them that, "If X.A.N.A. wants it destroyed, then it has to be important." Hearing this, the team began to defeat all of the monsters, until only Aelita was left. She then used a new power, her Energy Fields to destroy the remaining Creeper and save the Core.

Throughout the third season, several attempts were made by X.A.N.A. on the Core in the AI's attempt to destroy all of Lyoko. X.A.N.A. destroyed the surface sectors one by one to try and prevent the Lyoko Warriors from reaching Sector Five, leaving the Core wide open for annihilation.

In Final Round, William got possessed by the Scyphozoa during his first trip to Lyoko and destroyed the Heart of Lyoko with the army of Creepers. When he destroyed it, all of Lyoko disintegrated, leaving only William floating in the network.

In the fourth season, X.A.N.A. sent William and several Mantas including the Black Manta to destroy the Core only once in I'd Rather Not Talk About It. It later appeared when Jeremie launched his Anti-X.A.N.A. program where it was shown that the program emerged from The Heart of Lyoko to wipe off X.A.N.A. completely.

It later appeared in Code Lyoko Evolution, firstly in the episode Virus. Aelita and Jeremie tested a virus which needed to be tested, and the Core was the perfect thing to experiment on. Aelita didn't use a vehicle to get down to the Core Chamber via the South Pole, but used the Elevator directly from the Core Zone. 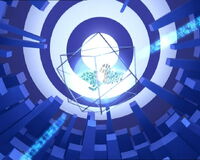 The Core with it's protective barriers. 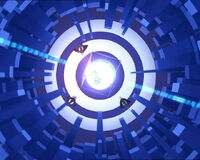 Mantas are attacking the core! 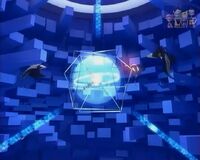 The first shield layer glows red with each hit the Core takes. 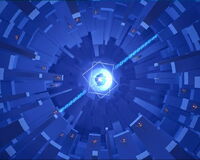 Monsters surround the Core of Lyoko, ready to destroy it! 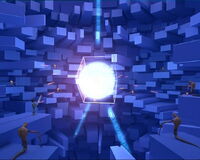 Creepers fire at the Core all at once! 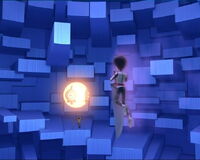 A possessed William levitates toward the exposed Core... 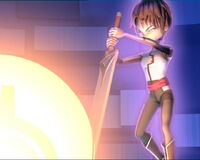 ...and uses his Zweihänder to destroy it, under X.A.N.A.'s control! 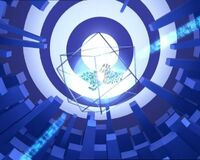 The Core with all the Sectors seen inside.

In Fight to the Finish. 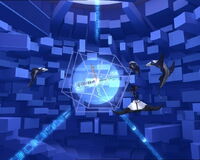 X.A.N.A. William and some Mantas surrounding the Core in I'd Rather Not Talk About It.

The core being attacked by Creepers and Mantas! 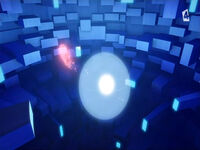 As seen in Evolution.