The Factory is an abandoned factory located in Boulogne-Billancourt, France, near Kadic Academy. It is considered to be the headquarters of the Lyoko Warriors. It used to be an old car factory, and was used by Franz Hopper as a base of operations in his experiments with Lyoko and Sector Five. The Factory was based on an actual factory, the Renault Automobile Factory located in Île Seguin, that was later demolished.

The Factory is located in the middle of the River Seine, on an artificial island. A bridge connects it to the mainland. A manhole on the bridge leads to the sewers below; typically, the Lyoko Warriors come up through this after traveling through the sewers from Kadic. The Factory can also be reached by boat; as shown when the Lyoko Warriors used a dinghy in Plagued when X.A.N.A.'s possessed rats blocked the bridge.

The building itself is occasionally used in X.A.N.A.'s schemes; he most often uses the Factory Floor to make things, or attack the Lyoko Warriors. For example, X.A.N.A. used the machinery there to make a robot in the episode The Robots.

At ground level is the Factory Floor, which contains the entrance to the Factory Lift. Also, on this floor are the machine rooms of the factory.

Franz Hopper's machinery is located below the main level, and is normally accessed by the lift, although an alternate route, which goes through the boiler room, exists. In The Trap, X.A.N.A. disabled the elevator, forcing Jeremie and Odd to use the route, despite X.A.N.A. rigging the boiler to explode. This path became a plot point in other episodes as well, such as in Replika, when Herb and Nicholas nearly found the supercomputer.

Additionally, there is a room with massive motor equipment with canals, which may have been for cooling systems. This was shown in "Replika" and "Tip-Top Shape".

The lab is the first room below the surface, and is where Jeremie monitors the group's progress in Lyoko.

Directly below the lab is the scanner room, which can also be accessed by a hatch from the lab.

The bottom room is the Supercomputer room, which contains the supercomputer. It is accessible using a hatch from the scanner room.

The Factory in Code Lyoko is based off a real factory in Paris called the "Renault automobile factory". The Factory was founded before World War II, and produced many vehicles during that time period. Later in 1992, the factory was shut down and abandoned. Renault, the car company, still exists and is now basically the same company as Nissan. In 2001, Antefilms used it as the base model of the Factory in Garage Kids, which later evolved into the model used in Code Lyoko. The real factory was demolished in 2005 to put in an art museum and apartment complex, although now it's just a park.

Before it was demolished, the real factory was an extremely large building. It contained many floors along with a basement and control room. There was a car assembly line. There was a painting room on the top floor. It contained machine shops and dormitories for the workers. The factory was also equipped with four very large back-up diesel generators (possibly made by the British company L. Gardner and Sons Ltd. which ceased engine production in the mid 1990s.) and a tram which ran along the roof. The backup generators can be seen in some episodes.

The Factory in Code Lyoko Evolution. 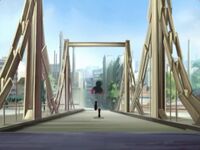 William runs off from the Factory to warn Yumi.

Using a craft to get to the Factory.

The light shoots over the entire Factory. 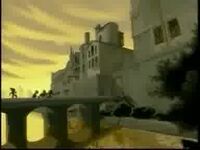 The kids head to the Factory. 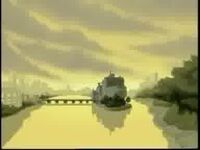 The Factory in Garage Kids. 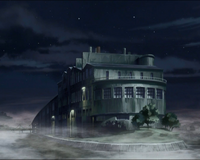 At the beginning of Skidbladnir, the Factory is surrounded by fog.

Jeremie starts up the supercomputer.

Sissi and Ulrich in the factory.

Kiwi on a chair.

Another map of all the old and a few new locations from Google Maps at: