Day breaks at Kadic and one of X.A.N.A.'s spectres, sporting the appearance of a football player, appears in the park. Not wasting any time, it starts to chase Odd while he's on a morning jog. Jeremie, already at the lab, calls his friends. Ulrich and Aelita are quickly ready and virtualize into the Mountain Sector. They’re confronted by a group of Krabs guarding the tower. The fight begins. Ulrich makes a diversion and lures them away by riding the Overbike while Aelita uses her Angel Wings to fly towards the tower.

On Earth, nothing seems to be able to stop the spectre on Odd’s heels. Not even Jim, proposing the spectre join one of the sporting clubs at Kadic. Odd thinks he’s lost his pursuer but the spectre is able to walk through solid objects. Phasing through a tree, it grabs Odd and steals his codes. On Lyoko, while the Krabs are defeated and Aelita is ready to enter the tower, it deactivates itself. On Earth, the spectre has disappeared...

The heroes soon understand why: Odd has lost the entirety of his codes, meaning he can’t deactivate towers anymore. X.A.N.A. has regained 85% of its power. This greatly upsets Odd.

While eating in the cafeteria, the heroes receive an SMS from Odd, telling them to come to the gym. As soon as they arrive, Odd traps them in a net. This proves that they lack trust. Once this demonstration is over, Odd proposes a solution: he has created a bunker in a storeroom in the gym. In the case of a spectre attack, the person targeted can hide inside while the fighters who no longer have codes (Jeremie, William, and Odd himself) protect them.

The idea isn’t to everyone’s tastes, notably not William’s, who leaves very irritated. At the same time, Jeremie’s phone beeps: a new attack has been launched. Odd locks Ulrich and Aelita in his bunker, given that it’s too early for them to return to Lyoko. Jeremie goes to the Factory while Yumi goes to talk to William. The situation is visibly electric between the two teens. Yumi offers a truce while they counter the attack, and they leave for the Factory.

The attack is in the Desert Sector. Despite their mission, things remain tense between William and Yumi. She asks him if she’s the cause of his discomfort, but gets no response. They’re soon confronted by Kankrelats, followed by Krabs, which they eliminate without difficulty. Arriving at the tower, a bigger threat awaits them: an evil clone of William. Far from attacking them, it addresses William and tells him sweet and manipulative words to entice him into joining X.A.N.A. again. Yumi tries to attack it with her staff only to be quickly defeated. To add to her pain, William lets the words of his clone reach him. He charges at Yumi, and she runs away.

On Earth, Odd’s bunker proves to be useless. The spectre sent by X.A.N.A. is the same as the one that stole Odd’s remaining codes that morning, the same footballer; it can therefore walk through walls. With Odd’s help, who stands up to the spectre, Aelita and Ulrich manage to escape. However, the spectre remains on their heels. Odd soon discovers the spectre’s weakness: it’s sensitive to sound waves. The smaller teen goes to the principal’s office and steals the microphone to talk into the speakers. He starts to sing, immobilizing the spectre.

William eventually sees reason and turns against his clone telling Yumi to run towards the tower. A fight takes place and William destroys his clone with a shock wave. Yumi deactivates the tower before the clone touches Ulrich and Aelita, causing the spectre to disappear.

Odd ends up with six hours of detention for what he did in the principal’s office. William puts aside his negative feelings and returns to the group.

Odd being caught by the spectre.

Odd lost all of his source codes.

X.A.N.A. at 85% of its strength and power. Fifteen more percent left.

Ulrich and Aelita being pushed into the bunker that Odd has made.

The spectre walking through the wall.

Odd attacking the spectre in order to let Ulrich and Aelita escape.

Aelita and Ulrich being trapped.

The spectre being stopped by the sound.

The spectre being exploded in the front of Aelita and Ulrich.

Ulrich and Aelita riding together.

A nice cruise through the Mountain Sector.

Ulrich distracting the krabs to let Aelita go to the tower.

Aelita being hit by a krab before entering the tower.

Ulrich saving Aelita by hitting the krab with his Overbike.

The tower deactivating itself. 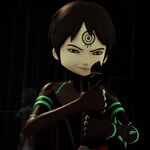 William clone appearing for the first time in Evolution.

William threating Yumi to be quiet.

Yumi being chased by William.

William clone being attacked by William.

The two Williams bumping into each other by using Supersmoke.

William clone being devirtualized by William.