Not to be confused with Translation.

Teleportation was an ability given to Odd in Triple Trouble because he was complaining that all the other three Lyoko Warriors had special abilities except for him. Thus, Jeremie created the teleportation program for Odd to cheer him up. However, the test ran into a bug in the program, causing Odd to leave a clone behind at the place where he had been teleported from and when Odd was devirtualized, he brought back the clones he had formed.

After the clones had been reunited into one Odd, Jeremie debugged the program and offered to give it back to Odd in full use without any problems. However, Odd refused to regain the ability, as he now believed that he was perfectly capable of fighting without it. Oddly enough, in Code Lyoko Evolution, there were a few scenes in which Odd humorously requests new powers. He even references teleportation as well as his original Anticipation ability.

The Code Lyoko: Social Game also has a power named "teleportation" for players based on Odd. Instead of its operation as above; the game version is different. In the game, it is a power that when unlocked for the avatar, "Odd-based avatars only," the power will allow the avatar to make a counterattack. This ability can be upgraded for better odds.

The green light from Teleportation's usage.

Odd teleporting in the Mountain Sector. 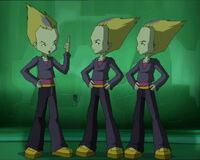 The end result of a bug: an Odd Trio.
Add a photo to this gallery
Retrieved from "https://codelyoko.fandom.com/wiki/Teleportation?oldid=140582"
Community content is available under CC-BY-SA unless otherwise noted.