Telekinesis is Yumi's one and only superpower on Lyoko, allowing her to psionically move and control several natural objects from a distance; mainly many rocks or a large boulder. To utilize it, Yumi places her fingers on her temples and is utilized with a whitish-pink aura around her body; a soft sound is heard as well. It requires great concentration and focus, which tires her out after short periods, hence why she rarely uses it.

Because of the digital enhancements she received in the fourth season, this psionic ability is somewhat strengthened to higher power-levels; enabling Yumi to utilize it more frequently and feeling less tired; being capable of using it for longer periods than ever before.

Despite it being drastically magnified to somewhat greater levels, she is unable to erect strong telekinetic shields around her and her fellow Lyoko Warriors for self-defense nor fly while psionically moving objects all at once.

In the original storyline, Yumi possessed this unusually strong psionic ability in the real world, but this plot device was removed when the pilot episode evolved into Code Lyoko. She had used it only once, to prevent Jeremie from falling down a railing and bringing him up to safety. Here, she had no telekinetic aura.

When Yumi discovered that she possessed this great psionic ability remains shrouded in mystery, as she did not utilize it in the two-part prequel, X.A.N.A. Awakens, after she was first virtualized in the Ice Sector. Because it requires intense focus and tires her out shortly, she rarely used it. She had to touch her fingers to her temples and had very little mental vector and motor function while using it, turning her into an easy target. She can move several rocks or boulders from a distance and telekinetically throw them (though gradually) at whatever monster she chooses.

In the episode, Big Bug, she moved a jagged rock in the Desert Sector to destroy a Blok, but was suddenly devirtualized by a Megatank. It is also worth noting that this is the only episode in which Yumi calls out "telekinesis" to use her psychic ability. Throughout the rest of the series, she no longer says it.

In Zero Gravity Zone, she used to create a rotating barrier of rocks in the Mountain Sector, though using it for much longer periods later tired her out greatly.

In Mister Pück, she used it to control her tessen fans to alter and perfect their flight pattern and targeting to destroy a Blok, and did the same in Saint Valentine's Day in the Forest Sector.

In Temptation, she moved quite a large boulder in the Mountain Sector to annihilate several Kankrelats that were blocking the way to the activated tower.

In Attack of the Zombies, she uses it to transport Aelita across a "large gap" (or so it seemed) to the activated tower in the Desert Sector. She also started using her telekinesis in conjunction with her tessen fans while they are in flight, making their aim much better and more unpredictable to their targets.

In Is Anybody Out There?, she used it to levitate a medium-sized platform created by Aelita to carry them to through the empty room above the void of Sector Five to the key and later to escape from the Core Zone.

She used it to save Odd from falling into the Digital Sea, and return Ulrich's saber to him in the episodes False Lead and Aelita, respectively. In Triple Trouble, she psionically moved a small rock created by Aelita in the Mountain Sector to push a Blok into the Digital Sea.

As a result of the digital upgrades and enhancements given to her by Jeremie, Yumi's telekinesis is somewhat amplified to slightly greater levels. She can now move larger objects and propel them at faster speeds from a distance without tiring out. She no longer has to put her hands to her temples and is more relaxed while using it.

In both Opening Act and Lab Rat, she used her newly increased telekinetic abilities to psionically control her tessen fans to give them more long-range accuracy in hitting William.

In Wreck Room, she mentally lifted a small rock to devirtualize the Overwing to make William fall off. She then moved a much larger rock in the Desert Sector and hurled it at William, who broke it with his Zweihänder.

She used it on Odd's Overboard to push a Tarantula into the Digital Sea and then gave it back in A Lack of Goodwill; something Odd did not appreciate, hoping that she did not "mess up the paint job."

In Hard Luck, she made a rock pillar collapse down on William in the Desert Replika to crush and devirtualize him. 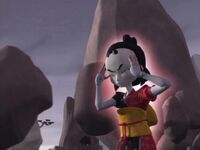 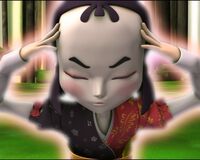 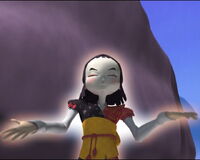 In the Mountain Sector in "Temptation".

Telekinetically moving a jagged rock in "Holiday in the Fog". 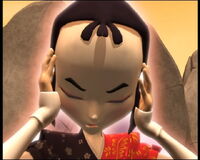 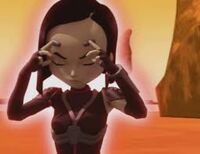 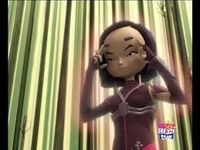 To control her fans in Season in "Opening Act". 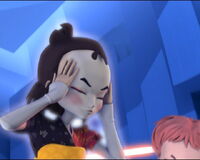 Telekinetically moving herself and Aelita on a platform in "Is Anybody Out There?". 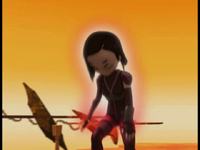 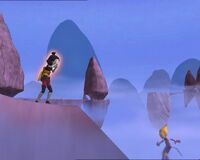