The Tarantula is one of X.A.N.A's monsters and the first new monster introduced in the second season.

Tarantulas resemble giant spiders with an Eye of X.A.N.A. on its head and four jointed legs. With a higher-than-average 125 life points and the vulnerable Eye on the top of their heads, they are quite difficult to destroy and one alone can wipe out the whole team single-handedly.

Tarantulas are equipped with laser cannons on the tips of their front legs that can shoot lasers causing 20 points of damage. Unlike other monsters, they do not need to charge their lasers before-hand. They can, however, charge their lasers for shots that cause 50 points of damage per hit. The Tarantula's twin laser cannon set-up allows it to fire from each leg in succession, creating a near-continuous stream of laser-fire and allotting it a near 180-degree field of fire. However, it can only fight effectively while resting on its hind legs, limiting its movement in battle and effectively keeping it from escaping. It can run on its hind legs to take long-distance shots, though it can only fire at a maximum 4 times before falling back onto all fours. Compared to other monsters, they can run fairly fast due to their long legs, but cannot balance well nor climb due to the cannons on the tips of their legs, limiting their movement to relatively flat surfaces.

Unlike most of X.A.N.A.'s monsters, Tarantulas can emit sounds. More than that, they are capable of communicating with each other. A pair will often have a short conversation in order to determine a course of action. They don't speak in an understandable fashion, of course, but rather through their various battle cries made of grunts and roars.

Tarantulas will travel alone or in groups of two to four. The Tarantula's strategy often involves guarding a target since their attack method prohibits them from moving while fighting. In the case where they chase down a foe, they will run the foe into a corner, allowing them to fire continuously. In the instances where they guard a target, they will simply remain in place, adjusting their position as necessary.

Tarantulas are used by X.A.N.A. as anti-vehicle, support for other monsters, and suppressive fire. Many times, the Lyoko Warriors get suppressed and stuck behind cover. The Tarantulas also have destroyed their vehicles more times than any other monster X.A.N.A. has created.

In Code Lyoko Evolution, Tarantulas shoot from their eye. 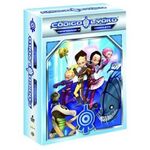 Shooting rabidly in the Ice Sector.

On two legs in the Ice Sector.

Near a hole in the Ice Sector.

Shooting at Odd near an activated tower.

Three all shooting at once. Watch out!

Its first appearance in New Order.

X.A.N.A. William waiting with two on each side.

Being taunted by Odd.

X.A.N.A.-William riding one in the Forest Replika in Lab Rat.

It takes her to the tower..

Bowing with the other monsters.

It charges up its guns.

Two guard the activated tower in the Ice Sector.

Odd faces off with the Tarantula in New Order.

It's guns have been sliced off by Yumi's Tessen Fans.

Tarantula with two Krabs, face off with a glitched up Yumi.

Ulrich fights one in the background.

Circling a Tarantula in the Desert Sector.

Another monster is seen being deleted behind the Tarantula and Krab.

Two about to fight Ulrich, Odd, and Aelita.

Tarantulas being virtualized by X.A.N.A..

A Tarantula in Quest for Infinity