Taelia is a member of the eighth grade in season 1, and came to Kadic in the middle of the semester, in The Girl of the Dreams. She bears a striking resemblance to Aelita. For this reason, when she first came to the school, Jeremie believing she was Aelita materialized. After he took her to the Factory and explained everything about Lyoko, Taelia called the police on Jeremie, seeing that he was threatening homeland security by letting X.A.N.A. have control over Lyoko. Aelita, who had been trapped inside a Guardian, was saved by Ulrich and Odd.

Taelia has red hair and wears a light purple jacket and a deep pink miniskirt. Her voice is also a tiny bit low in pitch, but her screams and gasps sound exactly the same as Aelita. Also, Taelia is not a very friendly person; she is rude and mouthy, much like Sissi, likely a byproduct of her orphan origins combined in this episode's case with what she thought was Jeremie being completely insane.

Taelia fully disappeared after the events of The Girl of the Dreams for unknown reasons.

Taelia was voiced by Sharon Mann, who also voiced Jeremie and Aelita.

Taelia brings adults to the factory.

She shows them The Factory.

Jeremie tries to bring her to her senses of who she really is. 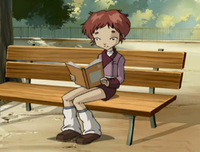 Sitting on a bench, reading. 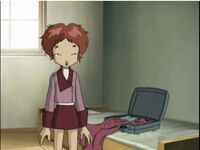 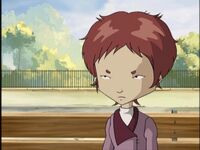