Suzanne Hertz, known by students as Mrs. Hertz or Ms. Hertz, is a homeroom teacher and also the science teacher at Kadic. She replaced Franz Hopper as a science teacher. With her students, she usually does a lot of experiments - some of which help against X.A.N.A.'s attacks. She deeply loves nature and is also shown to have a sense of humor. Jim Morales, the PE teacher and campus supervisor, is shown to have a crush on her in the second season.

In regards to physical appearance and voice, she usually looks and sounds like a woman in her sixties. In Code Lyoko, her hair is gray and frizzy but in Code Lyoko Evolution, her hair is brown, straight and shoulder-length. Ms. Hertz believes that Jeremie and Herb are two of her best students, and Ulrich and Odd are two of her worst.

Mrs. Hertz's classroom is a place of strict discipline and critique. She rarely holds back when discussing the poor behavior of her students out loud, and is steadfast in her desire to be rid of them if she thinks they are unwilling to put any effort forward as shown when she wanted to put Ulrich in remedial class.

Sometimes, Suzanne is drawn without the crow's feet behind her eyes and the wrinkles beside her mouth, making her face look younger. In the beginning scene of Nobody in Particular, her usual "old lady" inflections in her voice disappeared too, but only for a sentence or two.

Despite her size, Suzanne is surprisingly strong. She once threw a punch so hard it knocked Jim into the air, landing him approximately seven feet away from her as seen in Nobody in Particular.

In the book timeline, Mrs. Hertz started her career as Waldo Schaeffer's lab assistant, and had some involvement in the various prototypes to Lyoko. When Mr. Schaeffer disappeared, she replaced him at Kadic.

She makes a brief appearance in X.A.N.A. Awakens. Odd and Ulrich first met in her science class.

Ms. Hertz first appeared in the episode Seeing is Believing where she was doing a presentation to the class on the nuclear power plant that was being built on the other side of the town. When the nuclear reactor was shown to be malfunctioning, the plant's manager was shown to be discussing the problem with Ms. Hertz, implying that she has a strong background in physics. Ms. Hertz was present at the school when Yumi tried to warn everyone about the reactor about to explode due to an overload of electricity.

Ms. Hertz made a brief appearance in End of Take. She is show teaching the class. In Satellite, Ms. Hertz took away all of the students' phones when they went off in class. She is later seen discussing the matter with Mr. Delmas and Jim. It was hinted here that she and Jim are Mr. Delmas' advisers.

Ms. Hertz is later shown in Laughing Fit, where she taught the class about laughing gas, by demonstrating it on herself. Ms. Hertz explains to the class how the effects of laughing gasses can be stopped by drinking water. She is later seen attending the school play, and is affected by X.A.N.A.'s laughing gas attack.

She made a minor appearance in Killer Music, where she was confused when when Yumi ran out of the class in the middle of the lesson.

Ms. Hertz was shown in The Robots, demonstrating a new screw driver that cut through titanium. In Zero Gravity Zone, Ms. Hertz is shown experimenting in the lab when X.A.N.A. lauches his Zero-gravity attack, on the school.

In New Order, she assigned the students to go into the Park, find plants, photograph them, and diagram them. She gave Sissi a 0, since she diagrammed a plant from the mall florist.

In Saint Valentine's Day, she was utterly shocked to see Jeremie fell from his desk after possessed Aelita kissed him in cheek and then sent him to principal's office.

In Cold War, Mrs. Hertz took some of the children into the basement level of the Science Building after X.A.N.A.'s blizzard hit the city.

In Déjà Vu, Mrs. Hertz was in a really bad mood during chemistry class and therefore she refused Odd, Ulrich and Jeremie to go to "bathroom" and added that they are always up to something. She also said that she will confiscate Jeremie's laptop if he won't hide it.

In Lyoko Minus One, she took Yumi's class to the forest to learn about how pollution destroys the forest along with Jim and was possessed by X.A.N.A.. She chased Yumi with possessed Jim and the rest of the class in the forest and then knocked William unconscious.

In Nobody in Particular, she attempted to place Ulrich in the remedial science class, believing that it was the only way he had any hope of catching up. She stopped this attempt in exchange for a bribe: Argentine Tango lessons from Jim.

In Hot Shower, Mrs. Hertz and Jim supervised the work of the students when they were preparing the model of the Solar System for the physics class. When Yumi told everyone that the meteorite is about to hit the school, she was the only one who believed her and asked the principal to evacuate the school to ensure students' safety.

In The Lake, Mrs. Hertz co-ran a field trip with Jim. The two of them supervised the loading of the bus. Upon arrival, she gave an impassioned speech about nature. She then made a lewd joke. When the students were done unloading, they traveled the island, with her demonstrating various life. She was called in to check on Nicholas when he was shocked but she was shocked as well. She was nearly kissed by Jim when he was trying to wake her up. Later in the episode, Odd carried her unconscious body, to avoid getting crushed or electrocuted.

In Bad Connection. she was possesed by X.A.N.A. and threatened Odd and Sissi to push them from the Science Building along with other possessed people.

Suzanne is a French and English variant of the Hebrew name Shoshannah (שׁוֹשַׁנָּה). The name derives from the Hebrew word shoshan (שׁוֹשָׁן), which means lily. Hertz is a German surname derived from the German word herz, meaning heart. The name is also a reference to Heinrich Hertz, a German physicist and the namesake of the hertz, a unit of time that measures frequency, referring to Suzanne's position as a science teacher at Kadic Academy.

Refusing to let Ulrich, Jeremie, and Odd go to the "bathroom" in Deja Vu.

Talking with Jim and Yumi.

She loves nature as seen in The Lake.

Teaching the class in "Seeing is Believing".

Teaching the class in Laughing Fit.

Odd decides to teach the class for once.

Teaching the students about ants in Marabounta.

Wanting "Jim" to teach her how to dance in Nobody in Particular.

Possessed by X.A.N.A. in Lyoko Minus One. 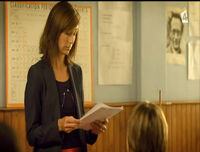 Teaching the class in Evolution. 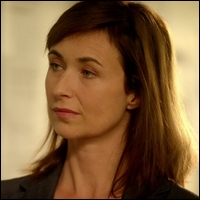