The Superscan is a program written by Jeremie, used for a number of things in the show, such as checking for activated towers, looking for Replikas, and monitoring X.A.N.A. while it's active.

The Superscan's predecessor was an unnamed program that Jeremie wrote between "X.A.N.A. Awakens" and "Teddygozilla". This version had to be run manually, was a supplement to having Aelita look for Towers, and couldn't get a tower's exact coordinates. This flaw became an issue in "End of Take", when X.A.N.A. created an illusion of a tower next to a real one.

This was usually run from the Factory Interface, Jeremie's Computer, or Jeremie's laptop.

The Superscan is a program written by Jeremie sometime between "False Start" and "New Order". It was written so Aelita didn't have to stay on Lyoko all the time and could have some kind of life. Unlike the previous version, this version constantly ran automatically, and would inform Jeremie whenever a tower activated, hence it being called the Superscan. This upgraded version also gave the coordinates of the activated tower in question.

This program was sabotaged a few times. For example, in "Is Anybody Out There?", X.A.N.A. corrupted the program so it couldn't detect towers.

After X.A.N.A. escaped the Supercomputer in "The Key", Jeremie updated the Superscan again. This modified version was able to detect X.A.N.A.'s approximate activity. In Straight to Heart, X.A.N.A. was detected somewhere in North America.

In "False Lead", the program was sabotaged for a second time so the warriors could fall into a trap in Lyoko.

It was occasionally shown that the program can detect attacks on the Core of Lyoko.

After the first Replika was discovered in "Maiden Voyage", Jeremie updated the Superscan to look for Replikas as well as active towers. When active towers were found on Replikas, it would report them as standard.

In "Kadic Bombshell", due to Brynja modyfing the Virtualization Enhancement Program, the Superscan was giving false alarms and would detect the activated towers even if the picked up tower wasn't activated at all.

After X.A.N.A. revealed itself in "X.A.N.A. 2.0", Jeremie restarted the superscan. This was what first detected the Cortex. At one point, it was revealed that the code for checking for activated towers and the code for determining tower locations is a different code. In "Chaos at Kadic", the program detected an activated tower without any issues, but wasn't able to determine the location of the tower, until Laura figured out that it was on the Cortex.

Gallery (From the IFSCL fangame) 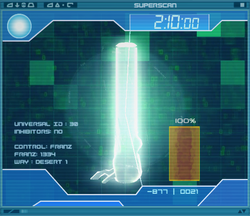 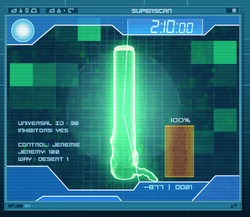 Tower activated by Jeremy in IFSCL 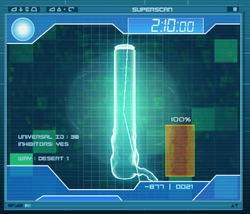 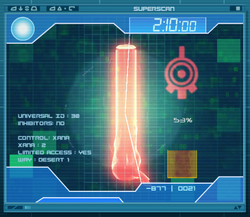