The Supercomputer Reboot Program is a program created by Franz Hopper. The only time Jeremie launched this program was in Wrong Exposure. The program refreshes all functions and inhabitants of Lyoko. The program was discovered written on a blackboard in the background of a picture of Franz Hopper and Aelita, in early form.

This program manifests itself as two waves of blue energy that sweep the sectors of Lyoko. When the first wave passes, anything it intercepts freezes and remains immobile until the second wave passes through. This program also seems to be the only way to free Aelita from X.A.N.A.'s control (short of devirtualizing her) after being possessed by the Scyphozoa. However, this process also leaves Aelita severely weakened until she enters a tower. 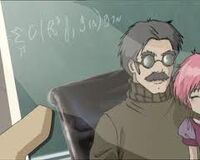 The equation behind the program.