Spectres, also referred to as Ghosts, are spectral entities that are computer programs given physical form. They are used as extensions of X.A.N.A. that serve as its means of launching its attacks on Earth, by possessing objects and creating pixelized humans to do its bidding.

Creating a spectre is done by activating a tower, which will send a digital impulse that will travel at hyper-speed through all the networks and gather huge amounts of energy, then guiding it by remote control toward an exit of the programmer's choosing (like anything electronic), and the impulse will come out as a spectre. These ghosts usually emerge from anything electrical, such as power outlets, lamps, electrified fences, or computers.

A spectre in the real world is a floating, polymorphic energy field that is controlled by specified programs. They have control over their form and density, allowing the spectre to be immune to harmful forces and physically interact with solid objects. In the episode Franz Hopper, it was shown that the spectre itself can be used as a weapon, by entering and blocking a person's respiratory airways through the ears, nose, and mouth, efficiently suffocating them.

Possession of an object or a living being is the spectre's main power. It melds with the vessel and can modify them on a molecular level. This allows the programmer of the spectre to control electronics, networks, physical objects, and living beings.

Regardless of what or whomever is possessed, the spectre controlling the vessel will disappear when the Tower is neutralized, and the victim will lose consciousness with no memory of events during his time being possessed. With pixelized humans, the spectre also causes the person to have the eye of X.A.N.A.. in his or her eye, but the spectre can change it back to normal to hide its true self as shown in "Double Trouble".

Jeremie created a spectre similar to X.A.N.A.'s to pixelize Odd in "Tip-Top Shape", but gave him the ability to be mostly stand-alone.

People who regularly fight X.A.N.A. on Lyoko can become resistant to possession, as demonstrated in "Mister Pück".

Polymorphic clones are really spectres that have the ability to impersonate humans. They also have powers similar to a pixelized human, like inhuman strength and speed, and can manipulate electromagnetic energy. Their resolution can degrade when they're struck. Noteworthy human-form spectres include X.A.N.A. Yumi, the William Clone, and the Jeremie Clone.

X.A.N.A. can also send monsters into the real world through teleportation as spectres in the image of their Lyoko manifestations. This was shown in Hard Luck when X.A.N.A. materialized Kankrelats as spectres into its military base holding Desert Replika.

Spectres also appeared in Code Lyoko's first formal pilot, Garage Kids. In this, they appeared as black ghost-like creatures that emerged from electronics. First, they emerged from somebody's desktop computer, and again from Jeremie's laptop. Later on Xanadu, they attack both Ulrich and a tower.

Translation is when a Tower is used to create a spectre from someone who is virtualized. See Translation.

A Spectre comes out from a lamp.

Coming out from a radio in Sissi's dorm.

About to possess Sissi in A Great Day.

Possessing a criminal to act as a Spectre.

Possessing Jim to do it's dirty work.

Spectre of a man in Saint Valentine's Day.

Yolanda as a Spectre in Tip-Top Shape.

Odd made into a Spectre to fight Yolanda.

A Spectre possessed someone to place bombs inside the Factory.

The Spectre allows for it's host to survive being hit by a car.

A Spectre coming out of William.

A spectre going to attack Kiwi.

Jeremie gives Odd powers like a spectre in Tip-Top Shape.

A Spectre attempts to suffocates Jeremie in Franz Hopper.

But failed due to the Tower being deactivated. 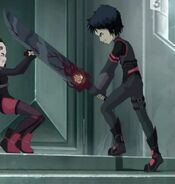 X.A.N.A.-William as a spectre, fighting Yumi.

Spectres can develop certain enhancements, such as the ability to move quickly.

X.A.N.A. creates a Spectre of Chris Morales in Opening Act.

Spectre creeping into a dorm room.

A spectre gets inside the Lab.

A Men In Black spectre.

The spectre seen in Crash Course.

The spectre jumps after Jeremie.

A spectre looking for Aelita in the town.

A spectre about to possess a rat.

"Why is there a football player in France?"

The spectre can walk through walls.

Spectres can have emotions, although they tend to be simple.

A Spectre on Lyoko

A spectre's sight in Evolution - noticing Odd before Odd could properly ID him as a spectre.

A spectre of Mr. Rouiller, the gardener.

A spectre similiar to Theo Gauthier in Evolution.