The Skidbladnir Sonar System is a program used by the Skidbladnir to detect things in the Digital Sea. It could be used to detect traces of DNA Sequence codes within the network. It was introduced in Hot Shower. The program has a similar appearance of the Holomap on one of the Skidbladnir's interfaces. In Hot Shower, the sonar picked up a faint trace of DNA in the network. However, the Lyoko Warriors had to return to Lyoko to deactivate a tower before they could explore further. It also appears in Code Lyoko Evolution to detect the Cortex. 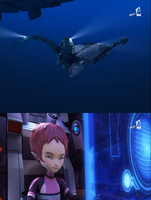 In Evolution.
Add a photo to this gallery
Retrieved from "https://codelyoko.fandom.com/wiki/Skidbladnir_Sonar_System?oldid=140010"
Community content is available under CC-BY-SA unless otherwise noted.