The Hangar is the area of the Core Zone that Aelita and Jeremie created in the episode Skidbladnir and programed it to hold the Skidbladnir when not in use. Blue light seems to shine within the hangar. Special docking mechanisms hold the Skid in place when not in use. On the top of the hangar is an exit that leads out of the north pole of the Celestial Dome. The hangar also contains the 5 teleport spots for entering and leaving the Skid. The only ways into the hangar are via an elevator, or through the north pole of the Celestial Dome. Monsters can also get in; this has been seen twice: in Skidbladnir and The Lake.

The system was sabotaged by X.A.N.A. in Friday the 13th. 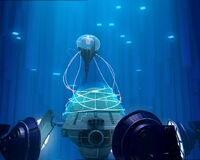 The Scyphozoa steals data from the Skid in The Lake. 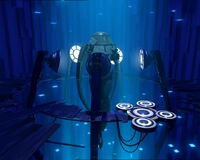 The Skid is docked.

The Skid prepares to take off.

William fights a Ninja in the Hangar. 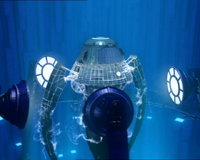 The Skid is programmed into the Hangar.

Yumi and Odd check the Hangar for the Ninja's tracking device.

Several Warriors are being energized into the Skid. 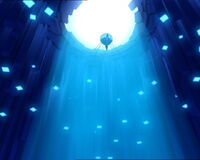 The Scyphozoa enters the Hangar. 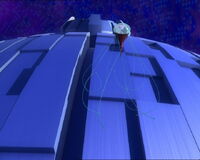 The Scyphozoa on the outside of the Hangar.
Add a photo to this gallery
Retrieved from "https://codelyoko.fandom.com/wiki/Skidbladnir_Hangar?oldid=139945"
Community content is available under CC-BY-SA unless otherwise noted.