Code Lyoko Wiki
Register
Don't have an account?
Sign In
Advertisement
in: X.A.N.A.'s vessels, Codes and programs, Phenomenon on Lyoko,
and 12 more
English

The Simulation Bubble is a simulation of the real world in Lyoko created by X.A.N.A.. The simulation bubble from Ghost Channel can be described as a giant bubble that looks much like a Guardian, except that it is completely stationary. The person, or people trapped can freely move around inside the bubble.

They are hemispherical and like towers, they seem to emit pulsations, except the pulsations are masked so they cannot be traced back to their source. When Aelita felt pulsations from the first bubble in Ghost Channel, she initially believed that X.A.N.A. had activated a tower she could not locate.

In Ghost Channel, after a person was freed, they had zero recollection of the event that transpired. In Distant Memory, the person was simply unharmed but appeared to wake up as if from sleep.

The first time a simulation bubble appeared was in Ghost Channel when X.A.N.A. used it to create a simulation of Kadic Academy and its surrounding area to imprison the Lyoko Warriors. X.A.N.A. does this to trick them into getting inside of the fake Scanners, so it can delete them for good. When the plan failed, it went for the direct approach to get rid of them with its illusion monsters and wires while they were still trapped, before Aelita dispersed the bubble.

The second time simulation appeared was in Distant Memory, when X.A.N.A. created a simulation of Franz Hopper's mountain home to imprison Aelita and so X.A.N.A. William can trap her. However Aelita quickly realized it was a trap and destroyed the bubble by herself.

In Temporal Paradox, Tyron had used an armored, metallic version of this technology to trap all of the Lyoko Warriors except for Yumi inside, so that he could use the return to the past program to discover their exact location in the form of calculated time loops.

It also appeared in Get Ready to Virtualize. You have to solve the puzzle to get rid of Simulation Bubble in Chapter 6. 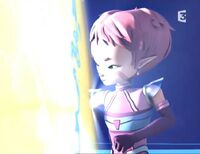 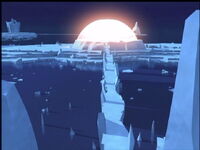 The simulation bubble from a far in Ghost Channel.

The group are trapped in the simulation bubble in Ghost Channel. 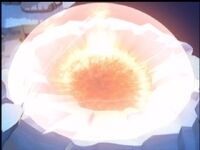 Aelita uses her Creativity to destroy the bubble. 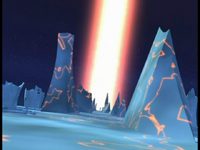 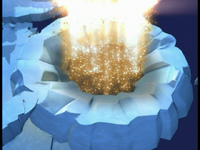 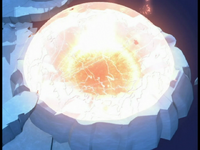 Yumi punching the bubble in desperation.

William arrives in front of the bubble.