A Lack of Goodwill

Sharks are one of the new monsters in Season 4 of Code Lyoko. It is black and white, (similar to a particular Manta) and looks like a shark with a long fin on its back. Like most of X.A.N.A.'s monsters, it has no eyes and instead bears the Eye of X.A.N.A. on its head. It is one of the newest of the monsters and is related to the Kongre.

Instead of firing a normal Laser like most monsters, Sharks fire what appear to be torpedoes from their mouth (similar to the ones the Nav Skids fire, possibly because the Scyphozoa absorbed data from the Skidbladnir in The Lake). 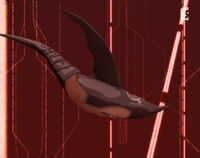 A lone Shark swimming in the Digital Sea.

A Shark swimming alone in the Digital Sea in Evolution.

A Shark firing a shot in Evolution. 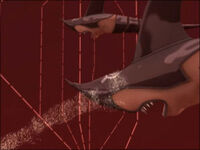