Sectors (Territoires in French), formerly known as "Regions" in Season 1, are the separate divisions of Lyoko. Each sector contains towers and large cables that connect them. The different characteristics that make them differ from eachother.

Throughout Season 1, there were only four known sectors with towers:

In Season 2, a fifth sector is discovered, Sector Five. To get there, Jeremie had to enter in the passcode "SCIPIO" to take Aelita, Odd, Yumi and Ulrich there from the surface sector edge by Transport Orb. At first, as a security protocol they had a limited amount of time to get through the Core Zone. Then, they took an elevator to get to the Celestial Dome where Aelita could gain information from X.A.N.A.'s data banks, though as another security measure, while doing so, Jeremie could not do anything. When Aelita is finished, Jeremie can materialize the vehicles, and open a tunnel to one of the other surface sector's way towers.

In Season 3, X.A.N.A. destroys the sectors one by one, culminating in the third season finale, when it possessed William and destroyed the Core of Lyoko. In doing so, he destroyed Lyoko completely. Luckily, Franz Hopper managed to survive and send Jeremie information on how to recreate Lyoko. The Forest Sector was destroyed in "Lyoko Minus One," by a possessed Aelita using X.A.N.A. (code). The Desert Sector was destroyed in "The Pretender," by the same means, as well as the Mountain Sector in "Double Trouble." In "Sabotage," the Ice Sector was sacrificed to repair the rest of the supercomputer and save Yumi.

In Season 4, Jeremie and Aelita spent time rebuilding the sectors one-by-one. Sector Five was the first one to be rebuilt, and the outer sphere was located in the skies, similar to that of the Desert Sector, however the sector had no platforms and was just open-air and the Digital Sea.

In Season 5, the Ice and Forest Sectors are lost due to the long period of inactivity of the Supercomputer.

Each standard sector has 21 towers, except for Sector Five, which has 2 or 3, the Volcano Replika, which has dozens, and the Cortex, whose quantity is unknown. The sectors in Lyoko itself are interconnected with Sector Five as a central hub via the Lyoko Wires.

Each surface sector is located above the Digital Sea.

In the third and fourth seasons, X.A.N.A. created hundreds of other virtual worlds, each with one sector. 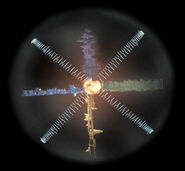 The holomap of the sectors.