Second Sight is a psionic ability that allows Aelita to see the invisible inner workings of Lyoko. While Aelita meditates on Lyoko, she has the power to "sense" things, for example: X.A.N.A.'s presence, the actions of someone using the Supercomputer, a tower, and the whereabouts of any monsters or avatars. This psionic ability can also be used to see materials that X.A.N.A. has hidden such as pulses that emit from activated towers or parts of the landscape that the multi-agent program has rendered invisible. She uses it only twice after the first season due to being able to leave Lyoko freely thanks to the innovation of the Superscan. The first time was to locate a tower that X.A.N.A. had rendered invisible along with the area that it had been located on, while the second happened when the supercomputer had been bugged thanks to Odd showing Brynja Heringsdötir the factory. There, since the Superscan was giving off false alarms, she went to Lyoko in order to sense if X.A.N.A. would attempt an attack. However, she didn't sense anything.

In Attack of the Zombies, Aelita used this power to see the Desert Sector when X.A.N.A. rendered it partially invisible. It had an inverted color palette.

In Suspicions, she seemed to have used this ability, as she told Jeremie that she needed to "feel Lyoko" across the Desert Sector, saying that it was calm and serene like her late father, and not chaotic like the Cortex. 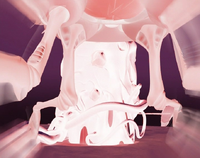 Running under the Krab.