Code Lyoko Wiki
Register
Don't have an account?
Sign In
Advertisement
in: The Factory, Technology, Supercomputer,
and 8 more
English

The second floor in the Factory

The scanners are giant cylinders, located in the Factory. It is used to get the Lyoko Warriors virtualized onto Lyoko. They are housed in the Scanner Room.

The scanners have many uses to the characters in the series, but their primary purpose is to send Ulrich, Yumi, Aelita, Odd and William to and back from Lyoko. Jeremie can also use them to separate things, as shown when Odd accidentally fuses with Kiwi, and even to create clones. X.A.N.A. has also used the scanners several times throughout the series, mostly to send monsters, and even William, to Earth. He can even trap members of Team Lyoko in the scanners.

They are approximately 3 meters tall and one meter in diameter, with gold colored plating. They have several large cables in the back that connect them to the Supercomputer and Factory Interface. There are 3 units in total.

They are unlike standard peripheral hardware, in the following: Normal hardware uses hardcoded memory points. For example, a printer is always interfaced in the same memory addresses. However, the Lyoko Warriors were able to salvage enough memory on the supercomputer, that they were able to splice in a bunch of other devices' memory to get a scanner to work. This shows that the scanners don't use hardcoded memory interfacing. This makes them unusual as far as their drivers are concerned.

When sending someone to Lyoko, it is unknown exactly what Jeremie does. Although, his speech may offer some clues. "Transfer" is what Jeremie says as someone enters a scanner. This means that he is identifying who the being is by transferring their bio data to the Supercomputer, and after he says this, ID cards pop up on his computer, and the card corresponding with the person in the scanner is selected. At this time, the Scanner doors shut and it's interior begins to glow. The next phrase is "Scanner". As it implies, this is the phase of the virtualization process where the being in the scanner is "scanned" into the computer, creating and/or loading their virtual body they will use while on Lyoko. This is shown when wind comes up from under the being inside, cause loose items to fly up such as hair and loose clothing. The person is almost levitated upwards. The last phrase is "Virtualization!" this is the final phase in which the being inside the scanner in digitalized and sent from the computer to Lyoko, shown by the wind from under them erupts into a huge gale and the glowing becomes so bright the scene whites out.

The following individuals have all been successfully virtualized via the scanners:

The scanners are used in or can be used for the following:

The scanners were built by Franz Hopper, some time in 1994.

On several occasions, X.A.N.A. sabotaged the scanners, by either severing the cables, sabotaging software, or by tearing them to shreds by materializing Kankrelats or Krabs. This happened in "Image Problem", "False Start", "A Bad Turn", "False Lead", "Sabotage", "A Lack of Goodwill", and "Fight to the Finish". 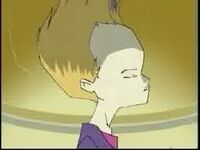 Odd being virtualized at the end of Garage Kids. 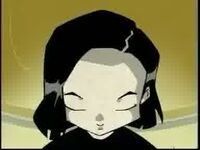 Yumi being virtualized at the end of Garage Kids as well. 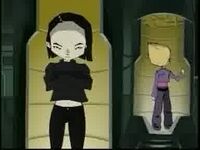 The scanners remain open during virtualization. 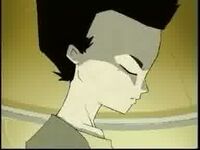 Ulrich is the first to be virtualized. 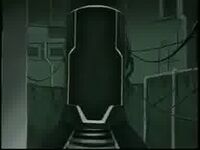 A scanner in Garage Kids. 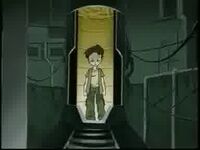 Yumi exhausted after fighting on Lyoko.

Aelita walks into the scanner room, ready to step into one of the scanners.

Jeremie inside a scanner, explaining how they work.

Yumi stands in front of a scanner before walking in it.

Aelita's memory of her father and her being sent to Lyoko for the first time.

Ulrich sitting down in the scanner after being brought back from Lyoko.

Jeremie in a scanner after being saved from limbo.

Yumi out cold after coming back from Lyoko.

The scanner starts the virtualization process.

Yumi is ready to be virtualized.

Yumi is virtualizated and then sent to Lyoko.

William's energy seems to be drained after being scanned.

Odd is virtualized in Season 4.

Odd and Kiwi come out of the scanners.

Yumi faces off with X.A.N.A. Yumi in the scanner room.

Odd greets whomever as the scanner pod opens.

Ulrich is exhausted after having a battle with X.A.N.A. William.

Aelita curled up in the scanner after being brought back to earth.

Ulrich falls down from the scanner, unconscious.

Ulrich with Odd and Odd in the scanner room.

Odd steps out from the scanner, still feeling the pain of his own Laser Arrow.

Aelita just before heading into Lyoko.

She steps into the scanner, waiting for the virtualization process to begin.

William's first time inside a scanner.

He seems eager to get to Lyoko and take on X.A.N.A.'s monsters.

William in a scanner seen in a flashback.

Both Ulrich and Aelita emerge from the scanners.

William finally back to earth!

Jeremie catches Aelita after she exits the scanner. Seems Odd wanted to comfort her as well..

Odd in the middle of Virtualization

Aelita in the Middle of Virtualization

Aelita being virtualized in Music To Soothe the Savage Beast

Jeremie appears from the scanner in Ghost Channel.

Aelita being scanned in Evolution.

The spectre trying to destroy the scanner.

Aelita being devirtualized and appeared in the scanner.
Español
Community content is available under CC-BY-SA unless otherwise noted.
Advertisement