With the general Nav Skid's used by the Lyoko Warriors, the Rorkal was created by X.A.N.A. and used by its most dependable weapon against its enemies, X.A.N.A. William. It proved useful anytime it was used and thus was an even match to the Lyoko Warriors' Nav Skids.

Since the main antagonist had access to a human body which was one of the teammates, it needed a way to directly attack the digital sea with or without Monsters so the Rorkal was created.

It appears as a more menacing version of a Nav Skid, given sharp fins that are installed on each side of the aquatic transport and had a black and maroon-colored paint job with red internal color schemes. With the main antagonist specialized in taking out its foes easily and with more precision, it is shown to have extreme amount of air pressure and more strength to compensate for its mission's success (which could be nonexistent as William survives easily cause of the program, such as in the digital sea) and has special targeting systems in the cockpit but this is because it shares the features of the other sea vehicles. It has the standard digital torpedoes but they fire at not just by hand-control but also voice command, evidenced by the Xanafied William. However, because this is enemy property, the Rorkal is not comparable with the Skidbladnir and so it cannot attach to it, even if up-close quarter attacks could be possible.

As this is one of X.A.N.A.'s creations, the Rorkal has many flaws and such is able to be destroyed like any other ship and thus capable of being overpowered. Also, since this is made by the aforementioned enemy to the Lyoko Warriors, it can only be made by it and with the X.A.N.A. destruction program coming into play, this vehicle was out of commission and unable to be used afterwards. 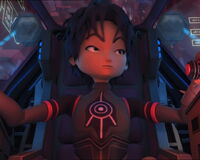 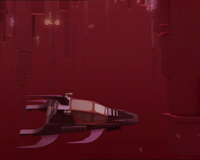 The Rorkal riding in the World Network.

Rorkal crashing after being hit...

The art of the Rorkal in season 4. 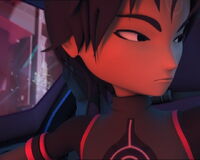 William looking around for a target. 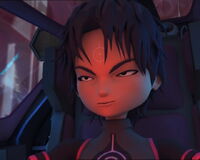 William thinking he has shot down Aelita.

The Rorkal in Quest for Infinty.
Español
Community content is available under CC-BY-SA unless otherwise noted.
Advertisement