The episode opens on a thorny question; while Odd insists that Jeremie program him some new powers, William appears. Facing the silence of his friends, he emphasizes that they don't need to be secretive about Lyoko in his presence. Before he leaves, he asks Yumi to work with him on a presentation and she accepts, much to the disdain of Ulrich who watches the two leave. The question of his rejoining the group resurfaces, but the heroes aren't inclined to let that happen.

In class, Odd, who is chasing after a girl called Elodie, talks to an upset Ulrich. He's exasperated about constantly seeing Yumi and William spend time together. Odd tries to reassure him, but it doesn't work. As Yumi and William finish work on their presentation, William leaves to go train. Yumi is surprised to see him return again so soon, and is forcibly grabbed; she realizes it's a spectre taking William's appearance. Ulrich and Odd walk by and see a troubled Yumi being held against her will and intervene. Odd flees with Yumi, who is in poor condition, while Ulrich distracts the spectre.

Having been warned, Jeremie and Aelita join the others in the lab. The virtualization is quick, into the Desert Sector. The heroes are confronted by two Tarantulas who block their access to the tower. Another problem; shots are being fired out of thin air! Yumi falls from her Overwing and is immediately devirtualized.

On Earth, Ulrich barricades himself in the gym where he comes face-to-face with the real William. After determining his identity, Ulrich explains that he's being pursued. William sees his not being informed earlier as further proof of his exclusion from the group. The dialogue grows heated as Ulrich expresses his refusal to see William rejoin the group while the other sheds light on his fear of competition. Behind them, the door gives way; the clone enters the gym.

On Lyoko, Aelita asks Jeremie how many Tarantulas he can see from the interface and says that there are three. Aelita quickly deduces that the third monster is invisible. She then throws a large energy field at the shots and reveals the position of the invisible Tarantula. Odd destroys it and heads for the tower, letting Aelita fight the other monsters. He deactivates the tower, destroying the William clone. Returning to Kadic, the news isn't good. Yumi's codes took a good hit and XANA climbed to 75% of its maximum power. What the heroes do not know is that the increase in power allows XANA to attack again. A tower is activated in the mountains and the AI takes control of the telephone networks. The heroes quickly realize what is going on when Odd, trying to pick up Elodie over the phone, sees his phone displaying the Eye of X.A.N.A.. The same is observed with Jeremie and Aelita's phones.

The heroes are confronted with a dilemma; Odd, Aelita and Yumi can't return to Lyoko so soon since virtualization requires at least 12 hours to pass in between. Sending Ulrich in alone would be dangerous, so they decide to ask William. Aelita goes to the gym to tell Ulrich, who is taking out his frustrations about his previous encounter with William on a punching bag. When Aelita tells him that he'll have to team up with William, he becomes enraged. Leaving, he heads to the factory and virtualizes himself onto the Mountain Sector alone, deciding to deactivate the tower without his rival's help. Odd, Yumi, and Jeremie ask for William's assistance. Pleased with the irony of the situation, he agrees to go along with them to the factory. He notes again upon arriving in the lab that it's ironic that Ulrich was in the middle of doing exactly what he'd accused him of, "going solo".

While Ulrich confronts Krabs, William comes to Lyoko, taking pleasure in borrowing the Overbike and joins Ulrich, trying to provoke him. Then, instead of lending a hand, the two engage in a contest of who can destroy the most monsters. In the fight, Ulrich is hit and knocked to the edge of the platform. He grabs the edge so he doesn't fall into the Digital Sea. William grabs his hand and allows Ulrich to deactivate the tower while he takes care of the remaining monsters.

Once the tower is deactivated, the heroes meet up in the lab. Ulrich thanks William for saving him from permanent virtualization, and apologizes for his rough attitude towards William. Back in the lab, the others congratulate the two on their teamwork, and William is officially allowed to rejoin the group as the sixth Lyoko Warrior, along with him officially mending a friendship with Ulrich.

Odd helping Yumi to get to the factory.

Yumi, Odd and Aelita getting virtualized. 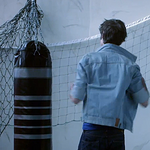 Ulrich getting ready to virtualize himself.

Aelita and Jeremie looking at the computer.