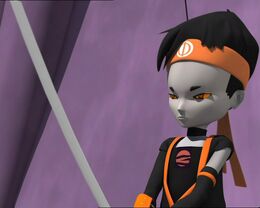 The Polymorphic Spectre is a spectre that either takes a human form, or can shapeshift into anyone at will.

The spectre is also a pixelized being, having all of the supernatural powers following from it.

When spectres take the form of another human being, they usually go after the person they are imitating to erase suspicion. The ones that can transform at will enable them to take on new disguises should their previous one become compromised.

A spectre in the real world can be virtualized into Lyoko and also use its shapeshifting power to copy the appearance and the virtual abilities of the person that it's imitating.

It was first seen in X.A.N.A.'s Kiss, where X.A.N.A. tried to cause trouble for the gang by kissing random people to make them feel jealous or depressed which could easily break them apart.

Yumi and Odd about to fight the Yumi clone.

The Ulrich Clone dashes after Ulrich in Revelation.