Petrification is a sub-ability of Aelita's creativity on Lyoko and one of her Powers in Code Lyoko and the game, Quest for Infinity.

The ability appears to be a small part of her creativity as it allows her to temporarily encase monsters in blocks of ice (an example in the series is of the Scyphozoa in Vertigo) This is used to reach higher ground or to destroy monsters easily as a petrified monster needs just one or two hits to be destroyed. She mostly uses this part of her powers in the video game but not so much for the series. In the game, the petrified monsters are easier to destroy. 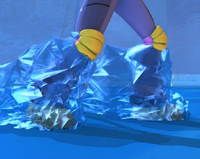 A possessed Aelita using Petrification on Odd in Saint Valentine's Day.
Add a photo to this gallery

Instructions in the game.

Petrification being used in the game.
Add a photo to this gallery
Retrieved from "https://codelyoko.fandom.com/wiki/Petrification?oldid=140555"
Community content is available under CC-BY-SA unless otherwise noted.