Pencak Silat is a family of martial arts from the Indonesian archipeligo. It has equal emphasis on empty handed, and weapons fighting alike. In more modern times, the empty handed portion has been more focused on, as demonstrated in Code Lyoko.

The empty handed section focuses on forging the body itself into a weapon, using the elbows, knees, feet, hands and so on, for combative purposes. Unarmed Pencak Silat aims for the goal of a user being able to walk away alive from any possible scenario, in both attacking and defending.

While the weapons of Pencak Silat are various, they all hold the same goals as the empty handed sections.

Pencak Silat has shown itself to be hard to pinpoint down exactly, in terms of founders, or years of creation, ect. Most of this is due to information in the area rarely being written as means of communication, but instead of being spread by spoken word.

Myth and Folklore aside, the creation of Silat historically links back to the 15th Century, in Peninsular Malaysia. From these origins, hundreds of other variations developed, coming into use because of special needs of the user, and what perceptions the founder has on their enviornment.

Pencak Silat schools can be found worldwide, but a large amount are present in France. With the Code Lyoko universe taking place in France, it is obvious why the art is present in the setting.

In The Context Of Code Lyoko

Ulrich and Yumi are both extremely capable in the art. Sissi is a competent beginner. Jim knows the art and even teaches it to the children in the Pencak Silat class. Hiroki and Johnny have taken lessons for it as well. Ulrich has a poster of a league in his room.

It is clear the impact the art has when observing the fighting styles of the Lyoko Warriors. Yumi and Ulrich, clearly use techniques of the system in which they are close to their enemy, and/or cannot use their weapons, similar that of modern Militaries, who teach their soldiers to use their body to fight, when their other weapons are not capable in the scenario.

Those who are not experienced in the art, such as Aelita and Odd, never use their own bodies for fighting purposes, instead using only their weapons for combat.

In addition, the weapons of the non practitioners above do not represent any real world technology. Ulrich and Yumi however, use swords and fans, both of which are covered in the Weapons of Silat, and the techniques used in this area are straight from the art.

The only time in which the Empty Handed section is shown ineffective, is when going against a entity who has superhuman strength and speed. For example, such as connected to X.A.N.A. Simply, the art was not created in mind to go against nonhumans.

Sissi told Aelita in "Ultimatum" that she took Pencak Silat classes in a failed attempt to impress Ulrich.

In "Canine Conundrum", it was shown that the class, which was introduced in "X.A.N.A. Awakens", was still active. The class had expanded from Jim teaching Ulrich and Yumi; to Jim teaching Ulrich, Yumi, Hiroki, Johnny, and Sissi. Milly and Tamiya tried to take the class for reporting purposes, but were unable to because of rules. 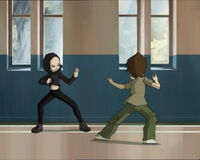 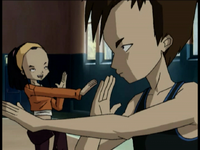 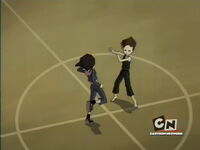 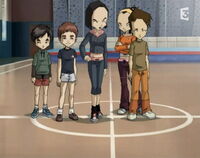