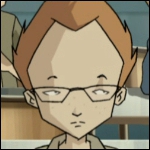 Paul Gaillard is a member of the eight grade who He wears green flannel with another shirt without buttoning over and gray pants, has glasses and is red-haired (orange) with the same style of hairstyle as Odd. He appears mostly as a background character, but can often be seen fleeing from a X.A.N.A. attack. Paul has a larger role in Attack of the Zombies, when he becomes possesed by X.A.N.A. He is usually mild-mannered, quiet, and studious, but when something weird happens he often reacts in extreme fashion, such as in Plagued when the lights in the Cafeteria went out, and he can be seen atop a table, hollering like crazy.

In Ultimatum, he can be seen fast asleep in music class. In the English dub, he was voiced by Mirabelle Kirkland.

He is one of the five children that got embraced by Jim in The Lake (he was comforting them by saying that he would protect them from the "monster"). He also hugged Jim around the waist as well. Like most minor characters, he gained no new outfit in Season 4.

Participate in the skateboard competition, where Tania Grandjean falls on top of him.

On several occasions he is seen talking with Julien Xao. 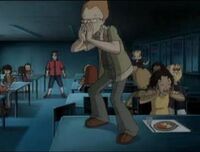 Standing on table in Plagued.

Zombie Paul breaking into the Cafeteria. 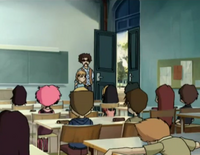 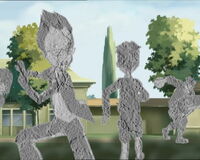 Turned to a stone in Triple Trouble. 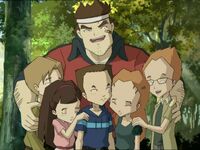 Jim embracing him in The Lake
Add a photo to this gallery
Retrieved from "https://codelyoko.fandom.com/wiki/Paul_Gaillard?oldid=138132"
Community content is available under CC-BY-SA unless otherwise noted.