Moonscoop created several Papercraft Games And Models to market Season 4 of Code Lyoko and Code Lyoko Evolution. Many of these were created for the Spanish market, where Code Lyoko was particularly popular. This is why most of them are branded as "Código Lyoko", rather than the French or English titles.

Two papercraft character models were created by Moonscoop. The first one was a model of Ulrich Stern. A second one was modeled after Yumi Ishiyama, but this one was never actually released. The second model's cancellation was caused by the first model not being popular. This was later found in a release of Moonscoop's archives. 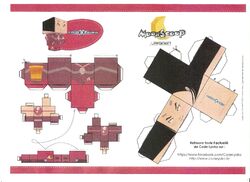 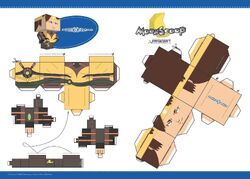 Due to the large number of toys released associated with Code Lyoko, Moonscoop teamed up with another firm to make environments to use the toys in. This was much like selling the Barbie dreamhouse as a supplemental product to Barbie, except they were made of cardboard and modeled Sectors of Lyoko.

Add a photo to this gallery
Retrieved from "https://codelyoko.fandom.com/wiki/Papercraft_Games_And_Models?oldid=127388"
Community content is available under CC-BY-SA unless otherwise noted.