Carole Baillien (2003-2007)
Nicholas Poliakoff is a student at Kadic Academy. He is a member of Sissi's gang, and mostly just stands there staring into space unless Sissi orders him to follow her. He is the stereotypical dumb, muscle kind of bully. It is still unknown why exactly Nicholas joined Sissi's "gang", but it is probably due to the fact Herb did. Nicholas also has a crush on Aelita, but has rarely acted on it. He once tried asking her on a date in Replika, asking her if she wanted to spend time with him in "a fantastic and breath-taking experience in the moonlight", which turned out to be fishing in the river by the Factory. She said yes to spite Odd, but then later lied to turn him down by saying she had a test to study for as she had to go on Lyoko mission.

He can play the drums and is in the Pop Rock Progressives, a band started by Odd. As a result, he is certainly more tolerant of and kinder toward the Lyoko Warriors than Herb and Sissi are. Nicholas is also easy to scare, as is Herb.

In X.A.N.A. Awakens, it was revealed that he and Herb started a fan club for Sissi that had only two members - him and Herb.

In The Chips Are Down, Nicholas got possessed by X.A.N.A. and made him knock out Jeremie in order to deactivate the scanners so the Lyoko Warriors would feel immense pain when they get shot by X.A.N.A.'s monsters.

In Attack of the Zombies, it is revealed that Nicholas watches too many horror movies, and therefore has a good picture of zombie motives and weaknesses. Ironically, he even became a zombie himself.

In Lyoko Minus One, Nicholas was forced by Sissi to applaouse on Herb's rather bad speach. It later turned out that he voted for Odd to be class representative much to Sissi's disgust and anger.

In Replika, he was asking various people at campus if they wanted to spend time with him in "a fantastic and breath-taking experience in the moonlight", which turned out to be fishing in the river by the Factory. He even asked Aelita and she said yes to spite Odd, but then later lied to turn him down by saying she had a test to study for as she had to go on Lyoko mission. He then asked Herb instead to accompany him during fishing. He saw Aelita and Odd on the bridge and decided to follow them. He and Herb almost discovered the existence of supercomputer but Jeremie made sure to lure them away from it. When Odd made an idea of how to make Nicholas and Herb leave the factory, Nicholas saw Odd and Aelita "kissing" in the elevator much to his and Herb's surprise. He then decided to leave the factory on his own.

In Music to Soothe the Savage Beast, he and Herb asked Aelita for her autograph making her very embarrassed. Then he was scolded by Sissi who then mocked Aelita for making a fool of herself during the concert. Nicholas made a stupid remark to which Sissi hit him in the head with The Kadic News magazine.

In Bad Connection, he was brainwashed by X.A.N.A. via his cellphone and stalked Odd throughout entire Kadic along with other brainwashed students and teachers. He and Herb found Odd hiding in the cafeteria but was knocked out by Odd after he threw a pot with meatballs at him.

In Echoes, he and Herb were rejected by Sissi. She referred to them as "dorks".

Nicholas is shown to act like the stereotypical dumb Jock. Evidence from most episodes show that Nicholas can be violent given the right situations. He has an extremely strange sense of humor. Nicholas is Herb's best friend, and therefore usually agrees with him in arguments and follows his lead, similar to Skull on Power Rangers when he is with Bulk.

In Attack of the Zombies, it is revealed that Nicholas watches a lot of  horror movies, and therefore has a good picture of zombie motives and weaknesses.  While Nicholas does not look it, he can be pretty brave, as he and Herb have explored the factory many times and has made the jump using the hanging ropes. When Odd formed his band in season 1, Nicholas is shown to be an excellent drummer and joins Odd's band, to Odd's anger. Nicholas is shown to be protective of his friend Herb.

Relationships with other characters

It is shown in some episodes in season 2 and the game Quest for Infinity that he has a crush in Aelita.

Nicholas and Herb constantly play pranks on Odd, in which Odd usually gets back at them by the end of the episode, but besides their pranking they seem to somewhat enjoy their company.

Nicholas seems to be one of Herb's only friends at the school. They seem to get along like to peas in a pod, despite having completely different personalities and interests. For reference, where Herb excels in class, Nicholas excels in sports. While Herb can be described as timid, Nicholas is shown as brave. Sometimes, whenever Herb feels insulted by something Nicholas said, he would roll up his sleeves and try threatening him by saying "I dare you to say that again", to which Nicholas responds by knocking Herb out with a punch to the face.

Nicholas is shown to have very little interest in being in Sissi's gang; from this fact it can be reasoned that the only reason that Nicholas hanged out with Sissi was that he wanted to be with his friend Herb. Nicholas is usually against being with Sissi, and is shown to be unhappy while helping her. In Echoes, he and Herb are rejected by Sissi; she referred to them as "dorks". Nicholas is the only person in Sissi's gang who is not openly hostile to Jeremie, as well as the Lyoko Warriors. While he is not openly hostile towards the gang, he will laugh at them if they ask a dumb question or mess up during class.

Nicholas and Herb constantly play pranks on Jim, much to his dislike. One instance was in Nobody in Particular, where Jim (under the possession of Ulrich's brain while it was separated from his body) slipped on a bar of soap Nicholas placed in front of his door.

Appearances in Other Media 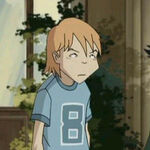