Monsters are simple programs created by X.A.N.A. to be its minions in the virtual world. They are directly virtualized into Lyoko and are primarily used to fight the Lyoko Warriors. According to codelyoko.fr, X.A.N.A. uses a base template which is used to make it easier to create new monsters.

X.A.N.A. virtualizes monsters to use as minions inside of the virtual world. In place of avatars, they are made to interact with Lyoko's sectors, and mostly uses them to fight the Lyoko Warriors and enemies in the virtual world, guard its activated Towers, and attack targets that it wants deactivated or destroyed. X.A.N.A. is also capable of launching programs from their lasers onto targets.

When the goal has been lost or fulfilled, X.A.N.A. either makes them retreat or devirtualize them at will, proving that all of its monsters are merely tools to do its bidding.

Monsters are created from a basic template program, with all their characteristics, allowing X.A.N.A. to create many monsters, all almost identical. This would correspond to the program created by Jeremie to virtualize vehicles. In some episodes, such as Marabounta, X.A.N.A. virtualizes creatures directly in the field as Jeremie does with the Lyoko Warriors.

X.A.N.A.'s monsters take up resources on whichever supercomputer holding the virtual world they fight on. It is capable of sending hordes as seen in The Chips Are Down, but continues to virtualize a few at a time to save machine resources. This is also demonstrated with the Kolossus, which can only be created using the combined power of multiple Replikas around the world network.

When monsters fall into the Digital Sea, they are deleted. The destruction of their virtual envelope corresponds to their complete disappearance within the virtual world. Most of them have relatively simple artificial intelligence.

Most monsters have the ability to aim their laser, though they do not seem to do so often. This is shown from the monster's point of view, which is dominated by a trisected, white circle. When targeting something, an upside-down, red triangle follows what they intend to shoot. When it locks on, the red triangle centers within the circle and three red lines connect each vertex of the triangle to the circle. Only a few monsters have directly demonstrated this targeting system, but it is safe to assume that others utilize the same system. 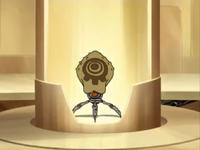