The Men in Black are a group of several people who attempted to apprehend Franz Hopper in 1994. While they remain an enigma that remain in the background, they are key characters to the lore of the series, being responsible for the abduction of Anthea Hopper, Franz's wife, as well as potentially Project Carthage.

All members of the Men in Black that have been seen were dressed in black suits and wore sunglasses. All were male, tall, and wore earpieces. It is also seen that they wielded guns as seen in The Key.

The unknown organization was obviously considered by Franz Hopper to be extremely dangerous, to the point where he considered sending himself and his daughter Aelita to Lyoko to be the only possible way of escaping them.

Details are sparse about who the Men In Black were or who they were working for. It is known that Aelita considers them to be responsible for the abduction of her mother, as seen in a flashback where Aelita recalls her mother being taken away in the back of a car during a point in time before Franz Hopper moved to the Hermitage.

On June 6th, 1994, at least three members of the organization broke into Franz Hopper's home, moments after Aelita returned from riding her bike and spotted them from her bedroom window. She called for her father as the men entered the front door, warning him of their presence. Hopper, in the living room at the time, ran and took Aelita by the hand as the men entered the front hall. The pair ran outside and into the sewer tunnel system just as the men, now with guns drawn, broke down the door to the garden and lost sight of them, likely losing them for good in the maze-like tunnels which lead to the Factory. Unbeknownst to them, Hopper then virtualized himself and his daughter to Lyoko.

The actions of the men in black would prove to be extremely traumatizing for Aelita in the years to follow. Even after she lost her memory she would still have nightmares about the men in black, imagining them as ferocious wolves and herself as a helpless elf running from them. These nightmares would manifest themselves in the real world as well, whenever Aelita visited a location related to their presence such as the Hermitage.

X.A.N.A. himself was apparently aware of these nightmares, and chose to digitally recreate these wolves to torment Aelita in Distant Memory. Likewise, a Polymorphic Specter in the image of one of the Men in Black was used in Crash Course.

The theorized idea is that The Men in Black are D.R.M. or D.P.S.D. operatives (France's military intelligence services) that work under the French Government in order to get information on Project Carthage and use it for their own purposes. The Men In Black were sent once they found out that Hopper created the all-powerful supercomputer, as well as the virtual world, Lyoko, and the sentient/autonomous artificial intelligence/multi-agent system X.A.N.A. in order to destroy Carthage, triggering the events of Hopper's disappearance, the formation of X.A.N.A. (as the antagonist) and the virtualization of Aelita. The Men in Black also abducted a young Aelita's mother, Anthea Schaeffer, and took her to an unknown location.

However, this is speculation based on very little information. 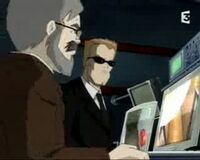 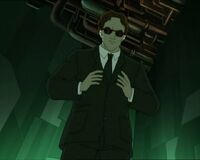 A Men in Black spectre. 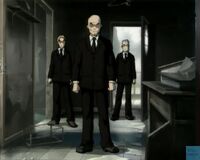 In the Hermitage in Aelita's vision.

Seen in a flashback. 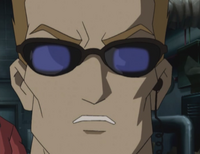 An agent spies on the gang. 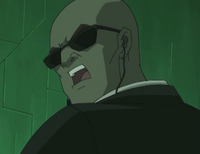 An agent about to be attacked by X.A.N.A.. 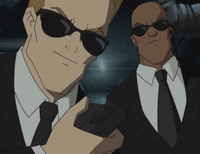 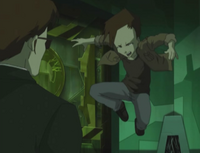 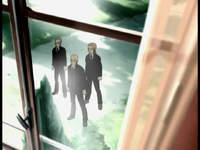 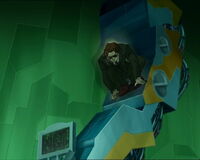 A Men in Black spectre on the supercomputer. 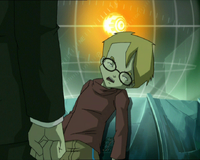 Seen infront of Jeremy who seems to be passing out. 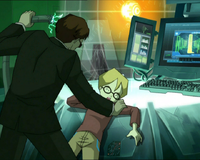 About to electrocute Jeremy! 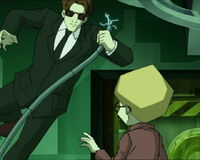 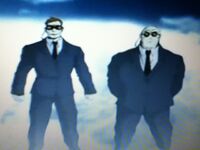 Standing outside the Hermitage. 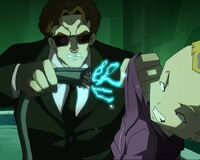 Men in Black spectre about to electrocute Odd! 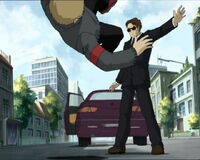 The spectre throws a man from his car. 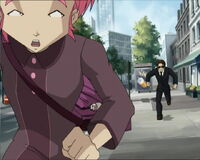