The Cortexian Rolling Articulating Spheroid Techto-compatible Mega-Multipod Vehicle, simply known as the MegaPod, is a new vehicle used by Lyoko Warriors in the fifth season to travel through the unprediectable Cortex.

This new vehicle was designed by Jeremie after the use of the group's original vehicles in the Cortex results in their devirtualization. As the Cortex is ever-changing, it required a vehicle that could adapt to the terrain as quickly as possible.

In its debut episode, it is piloted by Yumi, though she has some difficulty in controlling it due to mechanical issues. After Jeremie runs some recalculations on the MegaPod's programming, he manages to make it more easy to maneuver, as well as giving it the capability for a speed boost should it become necessary. As Yumi is occupied with other matters during the second testing of the MegaPod, Odd is voted as the pilot by Aelita and Jeremie, due to his skill in playing video games.

It has two modes to accommodate for the changing floors and walls of the Cortex. Combining the front two and back two wheels together, the MegaPod is able to travel on narrow roads. With the wheels turned 90 degrees, the MegaPod is able to travel between walls in mid-air. It has a shield like the Skid to defend against enemy attacks. It has also a cannon to destroy the attacking monsters, operated by the passenger to the direct right of the driver.

Gallery - Exterior and other

Concept Art with Ulrich for comparing in size. 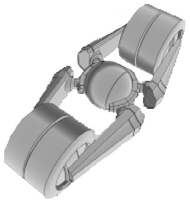 Megapod travelling between walls as seen from below it.

Megapod travelling between walls as seen from above it.

"Great, now we need to burn the thing." 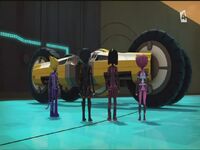 The gang observes the Megapod.

"I hope they have insurance for that." 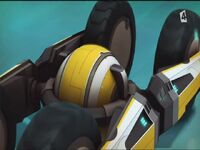 The Megapod a bit more up close.

Aelita and Yumi standing in front of the Megapod. 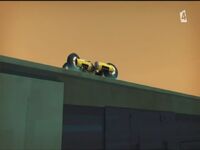 On the edge of the road.

Bowling with the Krabs. 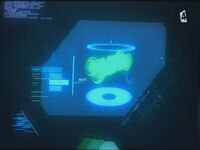 The Megapod is shown being virtualized.

Trying to outrun a couple of Megatanks.

The Megapod with the Manta behind it. 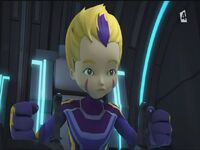 Odd is at the controls.

Ulrich and Yumi having an argument.

"What are they waiting for?" 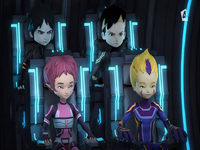 William, Ulrich, Aelita, and Odd in the Megapod.

Ulrich and Odd seen inside. 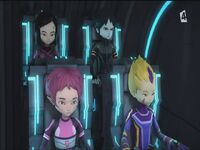 The gang sitting inside the Megapod.

And even more tough riding. 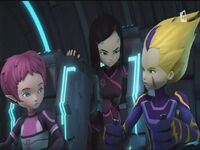 Yumi seems to be mad at Odd. 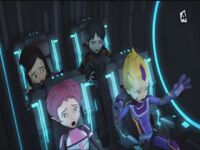 "Odd keep your hands on the wheel!"