Matthew Geczy (born August 23, 1964), also written as Matthew Géczy, with an accent mark, is a Georgia-American born voice actor working in Paris who provided some of the voices for the English version of Code Lyoko in the first 4 seasons. He has been living in Paris since the age of 18. His last name is pronounced as Gate-Sea. He informally goes as Matt. He is 5' 11¾" (1.82 m) tall. He periodically directs as well.

Raised on several US Army Bases, Matthew was offered a scholarship at New York University, but decided to decline it for a year with the intention of backpacking around Europe - he got as far as Paris, where he fell in love with the city and decided to stay.

He replaced Christophe Callabero as the voice actor for Odd permanently after Log Book. 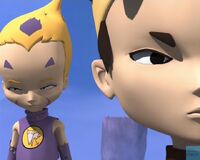