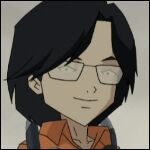 Mathias Burrel is a 10th grade student at Kadic Academy. He wears an orange shirt, green pants, and glasses. His hair is black. His appearances became a lot more frequent in Season 2. Not counting Yumi and William, Mathias is the student of his class that has had the most dialogue. In "X.A.N.A.'s Kiss", he was seen kissing, a Polymorphic Clone of Yumi. This gossip was spread to Ulrich. In the episode "Music to Soothe the Savage Beast", Odd is asking him for tickets for the Subdigitals, but he had tickets for another band called Aerosmooth. He was seen talking to William Dunbar in Fight to the Finish.

In the English dub, Mathias Burrel is voiced by Sharon Mann. In the French version of Code Lyoko, his voice is provided by Carole Baillien.

In "X.A.N.A. Awakens", Mathias tells Christophe M'Bala that Sissi had been taken to the Infirmary, which indirectly informs Jeremie and Odd. In "Missing Link", he recognizes Sissi impersonating Yumi, calls her Elisabeth, and causes Sissi to have a tantrum in which she slaps him when he mocks her. In "The Secret", he responds to Jim during attendence before going to the pool with the rest of his class. In "Opening Act", he is the third to last in presenting his music to Chris Morales, he thanks him for doubting his name. In "Crash Course", he is heard talking while playing ping-pong with Christophe. 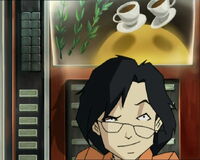 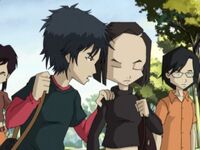 He is seen here in the background. 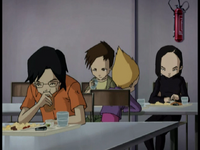 Eating his lunch in Cold War. 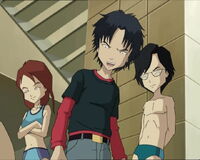 In his swimsuit on William's left in The Secret. 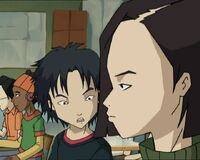 In the left corner next to Christophe M'Bala. 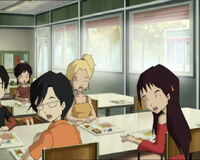 Turning his attention toward Jim in Maiden Voyage. 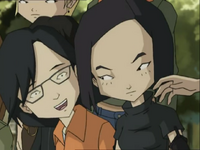 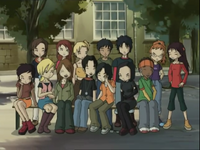 ...and gets slapped by Sissi after calling her by her real name.
Add a photo to this gallery
Retrieved from "https://codelyoko.fandom.com/wiki/Mathias_Burrel?oldid=149993"
Community content is available under CC-BY-SA unless otherwise noted.