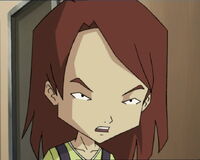 Magali De Vasseur is a minor character in Code Lyoko. She is in the eighth grade and was one of Odd's many girlfriends. She is a redhead, wears a yellow shirt with a green vest and brown pants.

After finding out in A Fine Mess that Odd was dating Claire Girard at the same time as he was dating her, she started to think of him as a jerk and a mere playboy. She told Odd that she knows all about Claire and he was so despicable after slapping him in the face.

In The Key, when Odd seeks a partner for the end-of-the-year dance, he confuses Magali with another watching her on his back and she replies "I thought I told you never to talk to me again!"; less than a minute later, when Yumi told William that she is sure she does not want to go to the dance with him, she is seen in the background with Odd and Ulrich smiling with her face directed towards Odd, possibly reconciling.

In The Lake, Jim comforted her as the lake monster attacked.

She made her final pre-Evolution appearance in Echoes.

Magali after talking to Lola warn/reject Odd never to speak to or interrupt her again.
Español Polski Српски / srpski
Community content is available under CC-BY-SA unless otherwise noted.
Advertisement