Lyoko Conquerors is a project meant to fill the void between seasons 3 and 4 of Code Lyoko. It revolves around the struggle of William, right after being caught by Xana, and how it has been put into competition between clones of himself, a test that Xana put in place to create the ultimate warrior. It’s the third big Code Lyoko fanproject created by Immudelki, along with the IFSCL and Lyoko Wanderers. 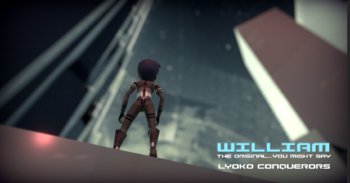 The pitch revolves around X.A.N.A., experimenting on his Replikas to calculate ways to retaliate on Lyoko. The project starts right after the events of Final Round. X.A.N.A. splits its new recruit, William, into slightly different copies of himself, to experiment and keep the one that will survive.

A (Blue) William is put into competition against other fragments of himself (Green, Purple, Yellow etc.), exploring Replikas, recruiting monsters, fighting, and creating a relationship with a very particular Kankrelat called Kawabata.

The project: A Game or A Movie

The first prototypes development began in mid 2016 and they have been published a few months after.

Along its development, the game has been successively subtitled 'The Replika Experiments', 'The Online Wars' and 'William Uprising'.

This project has seen multiples forms along the years. His last 'game' form was a hack’n’slash / action rpg type of game. But as Immu is also working on his IFSCL, Lyoko Conquerors might end up becoming ‘only’ a full length movie.

NOTE: All this images are WIP (Work In Progress) so nothing should be considered as final

All the monsters that appeared in the 4 seasons are planned to appear, as well as the Kolossus, which has also strongly been hinted as 'getting its origin' story through the game.

Some krabs in the desert 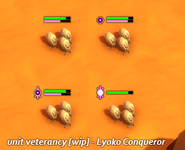 A preview of the unit veterancy display 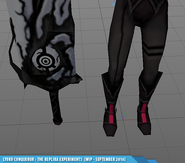 The Commander is ready to play 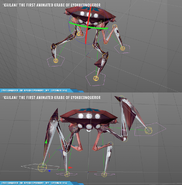 Kaliani is the first animated krab in Lyoko Conqueror

Some hornets escaped during a test of the game

This is how the game looked like in October 3rd

A krab and a hornet are flying through Lyoko Conqueror's world

Distinguishing between your monsters and the opponent's ones is important, so the Eye of X.A.N.A. in each monster will be team-coloured

The transporter will also be available at Lyoko Conqueror

The last and most powerful tower in Lyoko Conqueror is the Domination Tower. It will allow you to reboot the supercomputer and launch a Return to the past, even in multiplayer, so that's the most powerful weapon you can fight for.

An animation of a Krab walking