Code Lyoko Wiki
Register
Don't have an account?
Sign In
Advertisement
in: Codes and programs, Aelita, Tower,
and 4 more
English

Deactivates a tower controlled by X.A.N.A.

Code: Lyoko is the code entered in any Tower to deactivate it. Once entered, it triggers a deactivation which stops X.A.N.A.'s attacks. Before Code Lyoko Evolution, Aelita was the only one who could enter this code. This code has been entered in every Tower at least once. The code is entered by entering the Tower, ascending to the upper platform, going to the terminal, and placing a palm on the terminal.

During Evolution, Ulrich, Yumi, and Odd also managed to deactivate the Tower because of the source codes they had. Even though X.A.N.A.'s spectres stole these codes and Odd lost over 70% of them and the Tower couldn't recognize who he was, he could still enter Code Lyoko.

Once the code is entered, all programs run by the Tower are stopped. If a Tower is used to materialize a monster, as soon as its deactivated, its Laser and the monster freeze in mid-air. If it is used to program an alteration of a sector, it goes back to normal. If the Tower is being used to regulate a Spectre, then the spectre disappears. 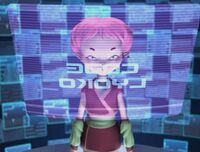 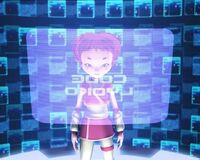 The code seen in Season 3. 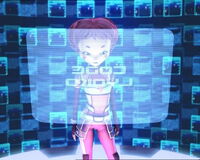 The code in Season 4.

Aelita enters the code in Evolution.

Yumi entering the code in Evolution.

Ulrich enters the code in Rivalry. 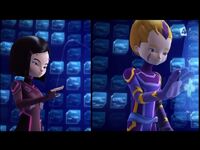 Yumi and Odd enters the code at the same time in Rendezvous.
Polski
Community content is available under CC-BY-SA unless otherwise noted.
Advertisement