It's 7:30 AM at Kadic as Odd waits for Ulrich to hurry up. Odd asks what he's looking for, also saying that he's getting hungry. Ulrich tells him to go down and get breakfast without him, as he fingers through his belongings, searching. Later, in the cafeteria, Odd has finished eating eight slices of toast and three bananas. He asks Jeremie, who is sitting next to him, if he's skipping gym class again. Jeremie says yes, adding it will give him more time to work on Aelita's materialization program. In the Dormitory Building, Ulrich comes out of his dorm room to find Sissi waiting for him outside. With a sly tone, she asks, "Can we talk for a second?"

At 8 AM, Yumi arrives on campus. She walks over to Jeremie and Odd, who are standing near the Dormitory Building. She spots Ulrich with Sissi, who are sitting and talking on the steps of the cafeteria. When Yumi calls over to him, Sissi blackmails Ulrich and drags him off with her. Later, in history class, Sissi can't help but look at Ulrich as Mr. Fumet lectures on the 17th-century European state of affairs. Behind the two, Odd talks with Jeremie about a possible relationship between Ulrich and Sissi and comments on Herb's jealous expression.

When class ends, Sissi is following Ulrich out when Odd grabs her and pulls her away, saying they have something to talk about. Jeremie asks Ulrich, "Mind explaining?" Later, as Odd distracts Sissi, Ulrich mumbles that he's been keeping a diary for years. He tells Jeremie that Sissi found his diary, and is blackmailing him with it; she will let everyone see the diary unless he goes out with her. To make things worse, Ulrich mentions Lyoko and X.A.N.A. in the diary. Jeremie assures him that he and Yumi will look for his diary while Ulrich is at the pool. A few feet away, Sissi yells at Odd who had asked her if she had gotten a nose job or not. Ulrich walks over to them and tells Odd to leave her alone. He puts his hand on her arm and walks away with her. She then looks back at Odd and snickers. Jeremie informs Odd he'll explain.

Later in the day, one of X.A.N.A.'s spectres enters a bus parked outside Kadic. As students board the bus, Jim brags to Odd that the bus is the latest in modern technology and that it runs on electricity. Odd comments on the bus's engine as he steps aboard. The bus driver notices sparks around the steering wheel for a moment. As the bus driver looks at the speed display, a black silhouette quickly races up the windshield. Seeing nothing else wrong, they start the trip to the pool. As the bus departs, Ulrich can be seen whispering to Odd. In Jeremie's dorm room, Jeremie tells Yumi about Ulrich being blackmailed. She decides to look in Sissi's room for the diary. Jeremie tells her that he'll be at the Factory. There, Jeremie contacts Aelita, who is sitting inside a tower, studying aspects of Earth. At that moment, he gets a call from Odd, who says the bus is going unusually slow. Jeremie then starts looking for activated towers.

Yumi picks the lock and enters Sissi's dorm room, looking for Ulrich's diary. She looks around the whole room, but finds nothing. She decides to take a break and lie down on Sissi's bed, but she feels a hard object inside the pillow. She opens it up and finds a diary. However, the diary is Sissi's and not Ulrich's. She reads the latest entry:

"I'm tired of his acting as if I don't even exist. I can't stand watching him pay so much attention to Yumi. So, while he was in the lunchroom, I went looking around. I just wanted a picture of him, but I found much better than that. Now, he can't possibly turn me down. I know what I'm doing isn't very nice, but it's the only way I can get him to stop ignoring me."

Yumi calls Jeremie and tells him that she found Sissi's diary. She also added that Sissi knows about Lyoko; She doesn't really understand it, but she's willing to use what she knows. Yumi assures Jeremie that she knows how she can get back Ulrich's diary. Meanwhile, the bus is being outpaced, even by bikers. While yelling at Ulrich for ignoring her, she gets a call from Yumi. Yumi, who is sitting in the bathroom, starts reading an excerpt from Sissi's diary about Jim. At this, Sissi asks what she wants; Yumi says she wants to know where Ulrich's diary is. Sissi tells her it's in the third stall of the girl's bathroom, on the water tank. Incredibly, it was above Yumi the whole time. Yumi then hangs up on Sissi. Hearing this, Ulrich gets out of his seat and sits down next to Odd. Immediately, Herb, obviously waiting for Ulrich to leave, sits down next to Sissi and starts commenting about Ulrich not getting off her back and such, to which Sissi just tells him to shut up.

Meanwhile, Jeremie finds the activated tower in the Desert Sector. The electric bus suddenly accelerates and the controls become unresponsive. Ulrich calls Jeremie and tells him that X.A.N.A. has taken control of the bus. Jeremie immediately starts tracking down the bus. Odd, deciding to go to Lyoko, opens the doors and leaps out of the speeding bus, onto the pavement. Accelerating to speeds over 100 kmph, the bus smashes through multiple cars causing many accidents and continues on. At Kadic, Yumi gets a call from Jeremie, telling her to get to the Factory. In the Lab, Jeremie has located the bus, and wonders where it's heading. On Lyoko, Aelita has the activated tower in sight. Yumi arrives at the Factory and enters Lyoko.

In the lab, Jeremie realizes the bus is headed towards the petrochemical plant, outside the city. In the bus, Jim cuts several wires, but it doesn't stop the bus. The bus driver insists that they have to jump, but the severed wires are keeping the doors shut. Still on the phone, Ulrich tells Jim that Jeremie thinks they're headed towards a chemical plant. Jim asks how he knows that, but Ulrich makes up an excuse. Sissi apologizes to Ulrich for stealing his diary and asks how she can help. Ulrich hands her his cell phone, saying she can relay messages from Jeremie. On Lyoko, Aelita and Yumi are near the activated tower when a twister appears and whips up a sandstorm. A Megatank rolls up into the middle of the sandstorm to attack them from a surpirse. The bus is being pursued by two police cars when Jeremie tells Sissi that the bus is about to turn left. Ulrich tells everyone to go to the left side of the bus to brace for collisions. The bus careens into a guard railing, but continues on its course. In the middle of the sandstorm, the Megatank fires its laser. Yumi knocks Aelita out of the way and they run. Suddenly, cracks appear in the ground and the piece of land they're on splits from the rest of plateau. Simultaneously, the sandstorm clears up. Aelita uses her Creativity to create a bridge across the fissures. Odd finally arrives at the Factory and enters the scanners. As Yumi and Aelita run, the Megatank returns and devirtualizes Yumi with two blasts.

Odd enters the Desert Sector and meets up with Aelita. A fissure opens up beneath her, but Odd grabs her before she falls. A ridge forms as two pieces of land split and the sandstorm returns, along with the Megatank. Odd and Aelita run from the Megatank and fling themselves across the fissure. The pursuing Megatank tumbles into the Digital Sea as the sandstorm clears up. Aelita then enters the activated tower. In the bus, Jim gets out a hammer and starts smashing through the windows. The bus swerves, causing Jim to fall out, but Ulrich manages to grab him in time. Pursued by four police cars, the bus smashes through the security gates of the chemical plant. The tower on Lyoko is deactivated, causing the bus to stop inches from a massive chemical tank. Jeremie then brings up a return to the past, reverting everyone back to the morning. Yumi takes Ulrich's diary from the bathroom and gives it to him, assuring him that she didn't read it. Ulrich says he'll tell her what was contained in his logbook, and then goes to his dorm room and asks Sissi, who is waiting outside of his room, if she's looking for something. Seeing the diary with him, she runs off. Ulrich opens the door to his room, finding Odd and Jeremie in there. They can't help but cheer. 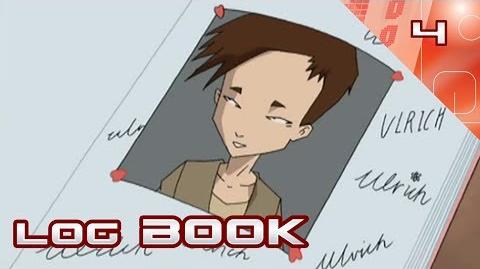