This is a list of songs which have been used in the Code Lyoko franchise. 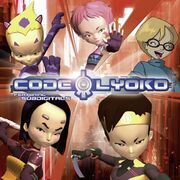 Quest For Infinity and Fall Of X.A.N.A. Soundtracks

Code Lyoko: Quest for Infinity used some music from Code Lyoko, and some custom music.

Some of the custom music from "Quest For Infinity" was recycled into Code Lyoko: Fall of X.A.N.A.. However, some additional tracks were included:

Get Ready To Virtualize Soundtrack

In "Code: Earth", it was revealed that Odd had created a music video called "Break Break Breakdance". The music video included several girls from Kadic Academy, a pink and purple background, and cheesy effects on par with Kylie Minogue's music video for "Your Disco Needs You".

There were equivalents in Spanish, Mandarin, French, and Hungarian.

Glad When You're Bad

Glad When You're Bad is a song X.A.N.A. wrote in "Killer Music". Anyone who listened to it would enter a coma, and their heart would gradually slow to a stop. Odd was the first victim, as he was listening to the song on his CD player. Sissi was affected by the song in a similar fashion. After Yumi brought Sissi to the Infirmary, Dorothy turned on some classical music. X.A.N.A. quickly changed the song to "Glad When You're Bad" paralyzing the Dorothy and almost Yumi. The virus then spread throughout Boulogne-Billancourt. In an attempt to stall the Lyoko Warriors, X.A.N.A. played the song through the speakers and pipelines in the Lab. This put Jeremie and Ulrich into comas. The effects of the song did not reach Lyoko. After the time reversion, all of the song's victims reverted to normal. The song itself was still downloadable, but it no longer put the listeners into comas.

Not much of the song is known, but Odd can be heard singing "So glad when you're bad - bum bum bum bum bum..." in his dorm.

Aelita's Mix is an electronic mix created by Aelita. It made its first appearance in "Final Mix" when Aelita discovered her talent for music and acted as DJ for a school dance. Aelita later used this mix for an opening act audition in "Opening Act" and to secure the role in the final round in "Crash Course". It made final last appearance in "Music Soothes the Savage Beast".