Code Lyoko has been released on DVD several times. This page is a List of Code Lyoko DVDs. Funimation released several Code Lyoko DVD sets for the English market. Universal Studios did the same for the French market. These were in installments, culminating in a release of the first season.

Season 1 Part 1 was the first of the seasonal DVDs for the French market. It's encoded for region 2, PAL. It has 3 disks.

Season 1 Part 2 was the second seasonal DVD for the French market. It's encoded for region 2, PAL. It has 3 disks.

Season 2 Part 1 was the third seasonal DVD for the French market. It's encoded for region 2, PAL. It has 3 disks.

Season 2 Part 2 was the fourth seasonal DVD for the French market. It's encoded for region 2, PAL. It has 3 disks.

Season 4 Part 1 was the sixth seasonal DVD for the French market. It's encoded for region 2, PAL. It has 3 disks.

Season 4 Part 2 was the 7th seasonal DVD for the French Market. It's encoded for region 2, PAL. It has 3 disks.

Like how Funimation released DVD sets of 4 episodes for the English market, Universal Studios released similar packages for the French market. These aren't as well known as their English counterpart, so information is limited.

"Sauras - Tu Grader Un Secret?", aka "Can You Keep A Secret?" was the first French Code Lyoko DVD. Its special features include profiles of the Lyoko Warriors, a clip from "False Start", and a virtual tour of both Kadic Academy and the Desert Sector. It is encoded for region 2, PAL.

College Kadic: Danger Imediat, literally "Kadic School: Immediate Danger" was the second Code Lyoko DVD for the French market. Its special features include profiles of the Lyoko Warriors, the Holomap, a satellite view of Kadic, a trailer for Season 2, and a karaoke version of the French version of School Is Out. It is encoded for region 2, PAL.

Universal and Antefilms also released a box set of "Sauras - Tu Grader Un Secret?" and "College Kadic: Danger Imediat" for the French market. The technical notes are the same, as are the features and episodes.

The Complete First Season was released on September 12th 2006 by Funimation for the English market. In order to fit the content on 3 DVDs, the episodes were out of order, for better compression. Following the release of this DVD box, Moonscoop announced Season 2. It is encoded for region 1, NTSC.

"TOTAL DEVASTATION IS APPROACHING EARTH AND THE PARALLEL UNIVERSE OF LYOKO. X.A.N.A., a powerfully destructive virus from the virtual realm has infected our planet's Super Computer. The existence of both worlds now rests in the hands of four kids who are students on earth and supernatural heroes in Lyoko. With the mysterious Aelita as their only guide, they must overcome swarms of monsters, sinister deceptions and impossible odds to restore prosperity. Hang on for a 26-EPISODE thrill ride and a never-before-seen final battle that will determine the ultimate fate of Lyoko and Earth!"

X.A.N.A. Unleashed was the first Code Lyoko DVD for the English market, released by Funimation. It has a random sampling of Season 1 episodes. Its extra features include profiles of Jeremie, Aelita, Odd, Ulrich, and Yumi. The extras also include sneak peeks of the Vehicles and Season 2 characters, a karaoke version of A World Without Danger in English and French, and previews of Braceface, Music, Movies, and Mayhem, Yu-Gi-Oh!, and Redwall. It is encoded for region 1, NTSC.

Music, Movies, and Mayhem was the second DVD release, also a Funimation release. It was released on December 20th, 2005. It had a map of every Tower activated on the DVD's episodes. It contained profiles of Sissi, Nicholas, Herb, Kiwi, and Jim. It also had a karaoke version of the English version of A World Without Danger and a preview of X.A.N.A. Possessed. It is encoded for region 1, NTSC.

It contained the following episodes:

X.A.N.A. Possessed was the third DVD release, also by Funimation. It was released on March 14, 2006. It was also a compilation of random season 1 episodes. Its special features are a recreation of the Holomap, a preview of Sector Five, and profiles of the Monsters. It is encoded for region 1, NTSC.

Sector 5 Mystery was the fourth and last DVD released by Funimation on November 28, 2006. It is the first volume for Season 2 and it contains the first five episodes of Season 2. No special features were included, but a preview of the next DVD was given. It was going to be called "Missing Link", which includes the next four or five episodes. Since then, no other DVDs have been released by Funimation and they haven't released it on DVD after the promo preview. It is NTSC, region 1, encoded.

These DVDs were released for the English section of the region 4 market by Beyond Home Entertainment. Like most of the Funimation packages, these only included small subsets of random season 1 episodes. These were mainly released in Australia and New Zealand, though they can be found in southeast Asia.

Several seasonal DVD sets were distributed by Warner Brothers for the European Spanish speaking market. They are Region 2 PAL encoded. They have European Spanish and English language tracks. Seasons 1-4 were released in this manner. Each set is divided into volumes. Seasons 1 and 2 are divided into 6 volumes each. Season 3 is 3 volumes, and Season 4 is two abnormally large volumes. 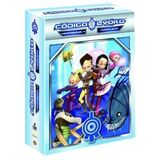 Add a photo to this gallery
Retrieved from "https://codelyoko.fandom.com/wiki/List_of_Code_Lyoko_DVDs?oldid=146681"
Community content is available under CC-BY-SA unless otherwise noted.