Léonie Berthonnaud (born December 27, 1994), or with a non-accented spelling, Leonie Berthonnaud, is a French actress who plays live-action Aelita, and the derivative roles, in Code Lyoko Evolution. She also provides the French voice for said characters. She is a natural blonde and wears a pink wig when filming the live action scenes.

Léonie was legally a minor during the production of Season 5. She has lived in the same house as the rest of the core cast, except for Diego Mestanza, Melanie Tran, and Quentin Merabet, all of whom were residing separately.

She has visited Ghana. 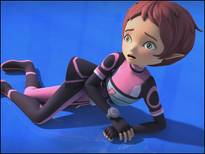