Laser Arrows are Odd's one and only weapons on the virtual world of Lyoko and on the Cortex.

Unlike Ulrich, Yumi, and William, all of whom have weapons while on Lyoko, Odd fights using Laser Arrows, which are small projectiles he fires directly from the gloves of his avatar. Designed for long-range combat, Odd fires Laser Arrows out of the tops of his wrists, and usually holds his arm outstretched while doing so.

Despite their convenience, speed and range, Odd's Laser Arrows are arguably the weakest weapon among those possessed by the Lyoko Warriors, often requiring three or more direct hits to destroy Monsters. In addition, Odd may run out of ammunition while on Lyoko, requiring someone at the interface in the lab to reload his gloves using a special program. Starting in the first season, Odd only had 10 arrows per reload - but later Jeremie could reload him up to 20 arrow. In the second season, Jeremie upgraded the reload program even more to reload him with 10,000 arrows at a time.

Throughout the first season, Odd can only fire Laser Arrows using his right hand (the exception to this being the first episode of the series, Teddygozilla, which contains a large amount of anachronistic information). In Season 2, he acquires the ability to fire from both wrists, increasing his firing rate and versatility.

During the episode Franz Hopper, Odd's Laser Arrows are temporarily upgraded so that they hone in on enemies and strike multiple targets. However, these upgrade are lost later in the episode.

Programs may be loaded into Odd's Laser Arrows, as shown in Marabounta.

In Code Lyoko Evolution, Odd can fire barrages of three or six them at once at high speeds via his new gloves.

Whenever Odd fires a Laser Arrow, a small blue flash emits from the place the projectiles are fired from. However, the appearance of the Laser Arrows themselves change significantly throughout the course of the original series.

In Teddygozilla, Odd's Laser Arrows are miniature black arrows, complete with shafts and fletchings. However, for the rest of season one, Laser Arrows resemble arrowheads or spearheads and are a metallic gold color.

During the fourth season, when Odd is translated to Earth as a spectre, his Laser Arrows retain their shape, but are bright purple in color and appear to be made of electricity rather than metal.

In Code Lyoko Evolution, the Laser Arrows' appearance changes yet again. In this series, the projectiles are triangular, made of blue energy, and are followed by a short yellow tail when fired. Also, in Evolution, Odd's Laser Arrows are fired from his knuckles as opposed to his wrists, and unlike the original series, Odd's gloves have visible holes through which the Laser Arrows are discharged. 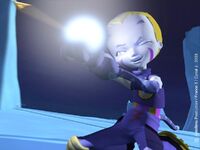 The arrow flashes out from Odd's wrist! 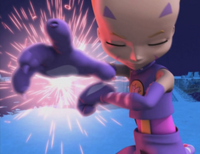 Odd shoots a monster coming up behind him. Show off. 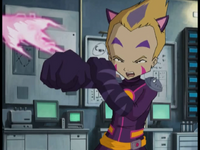 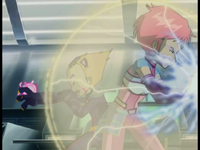 It flashes from the top of his wrist, and glows with purple-pink electricity. 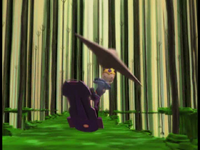 Firing at a Hornet from ontop his Overboard. 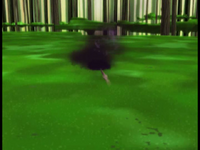 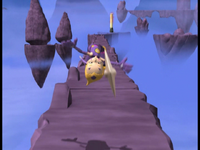 Shooting upside down in the Mountain Sector. 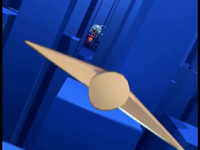 An arrow heading right for the Scyphozoa. 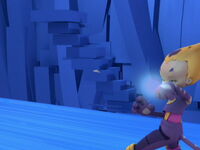 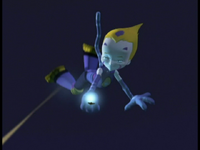 Odd shooting an arrow in mid-air. 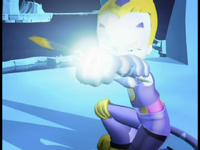 Shooting an arrow in the Ice Sector. 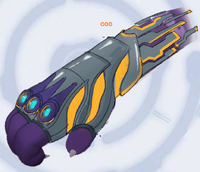 Odd coming out of the Megapod in Mrs. Einstein and virtualizing his laser arrow gloves.

Odd shooting with his Laser Arrow gloves in the air. 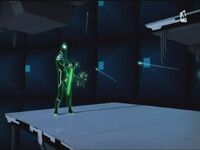 Firing laser arrows at a Ninja. 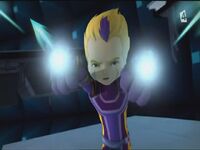 Shooting Laser Arrows on his Overboard.

Firing Laser Arrows at the Krab.

Firing Laser Arrows at the Krankelat.

Odd shooting Laser Arrows with William at his side.

Missing the Laser Arrows at the Krankelats. 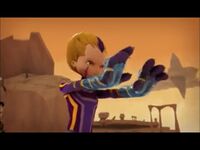